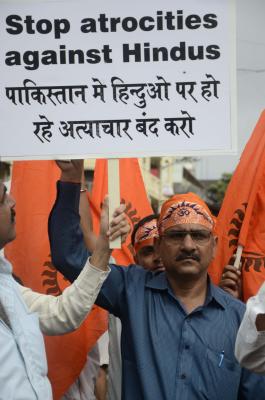 New Delhi– The Hindu community in Sindh has been protesting against government inaction and the injustice being committed by it towards the Hindus.

The Pakistan Dravid Ittehad (PDI) has demanded that insecurity among the Hindu community should be redressed on priority by the government.

PDI Chairman Faqira Shiva and others addressed a massive gathering of protesters on the Mirpur Khas road in Sindh on Monday, warning of a protest in front of the Sindh Assembly on August 1 against forced abduction of Hindu girls, forced religious conversions and other such issues.

These leaders have decided that they would continue to protest till a law is introduced for the safety of the Hindu community. Representatives of several Hindu societies were present at the meeting.

Advocate Sulema Jahangir, board member, AGHS Legal Aid Cell, while writing in Pakistan daily Dawn had said that over the years, the laws applicable to the rights of religious minorities in Pakistan have shifted from being neutral to blatantly discriminatory — from electoral laws, family laws, law on evidence, Hudood laws, redistribution of income through Zakat and Ushr, trust and evacuee property laws, domicile and nationality, to offences against religion.

“The discrimination against women belonging to religious minority groups is worse; they become victims of rape, abduction, forced marriage and forced conversion. That it is largely underage girls who are ‘converting’ to Islam speaks volumes of the vulnerability of the converts, and the motivation of those behind the conversions,” Jahangir said.

Jahangir also said that twice the Sindh government had attempted to outlaw forced conversions and marriages, including laying guidelines for the court process in the Protection of Minorities Bill, placing an age limit of 18 years upon conversions and enabling better due process.

In 2016, the bill was unanimously passed by the Sindh Assembly, but religious parties objected to an age limit for conversions, and threatened to besiege the assembly if the bill received approval of the Governor, who then refused to sign the bill into law.

In 2019, a revised version was introduced, but religious parties had again protested. A sit-in was organised by Pir Mian Abdul Khaliq (Mian Mithu), a political and religious leader and a central character in many cases of forced conversions of underage Hindu girls in Sindh.

In March 2019, nearly 2,000 Hindus had staged a sit-in to demand justice for two sisters, Reena and Raveena, who they claimed were forcibly converted and married.

“Pakistan has failed to comply with its international obligations to protect non-Muslim women and girls from exploitation by powerful groups and criminal elements,” Jahangir wrote.(IANS)

MC Dhawan: A lost hero who made huge contribution to the...