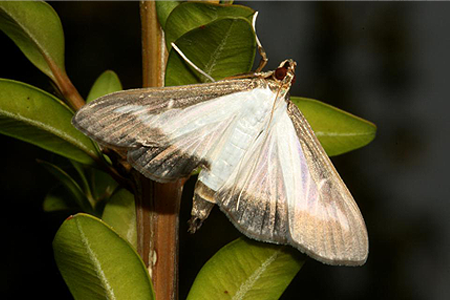 Box tree moths are an invasive pest that feed on the leaves of boxwood shrubs and can cause complete defoliation, eventually killing the plant. While state and federal inspectors have not found any signs of box tree moths at the nurseries, state officials warn that some of the plants may have been sold before inspections began, or were purchased out of state and planted in Massachusetts. MDAR and APHIS urge anyone in Massachusetts who may have purchased boxwood shrubs this spring to check the plants for signs of the moth.

“MDAR is working with its federal partners at the USDA to prevent the box tree moth from spreading and establishing itself in Massachusetts,” said MDAR Commissioner John Lebeaux. “We ask Massachusetts residents that purchased boxwood shrubs this spring to take a close look at the plants to aid in our efforts to prevent this invasive species from expanding into the state and causing severe damage to Massachusetts’ popular boxwood shrubs.”

If a boxwood plant was purchased this past spring, state officials request that residents inspect it for signs of the moth, and report any findings to https://massnrc.org/pests/report.aspx or by calling 617-626-1779. When inspecting your boxwood shrubs, look for all of the life stages of this pest: eggs, caterpillars, pupae, and adults. Eggs are typically laid in gelatinous masses on the underside of boxwood leaves, but may also be laid singly. Caterpillars can grow up to 1.5 inches long, and are yellowish green with a black head, and long black stripes and spots that reach from the head to the end of the body. The caterpillars create pockets of webbing within the boxwood shrubs to wall themselves off from predators. When they are ready to morph into adult moths, they form small green pupae. Adults typically have white wings with a dark brown border, but can sometimes be all brown with just a small white streak on each wing.

Box tree moths (Cydalima perspectalis) are native to Asia and are now a pest in both Europe and Canada. They can produce several generations between June and October, which makes urgent action essential to prevent this pest from establishing itself in Massachusetts.

Dark form of the moth.