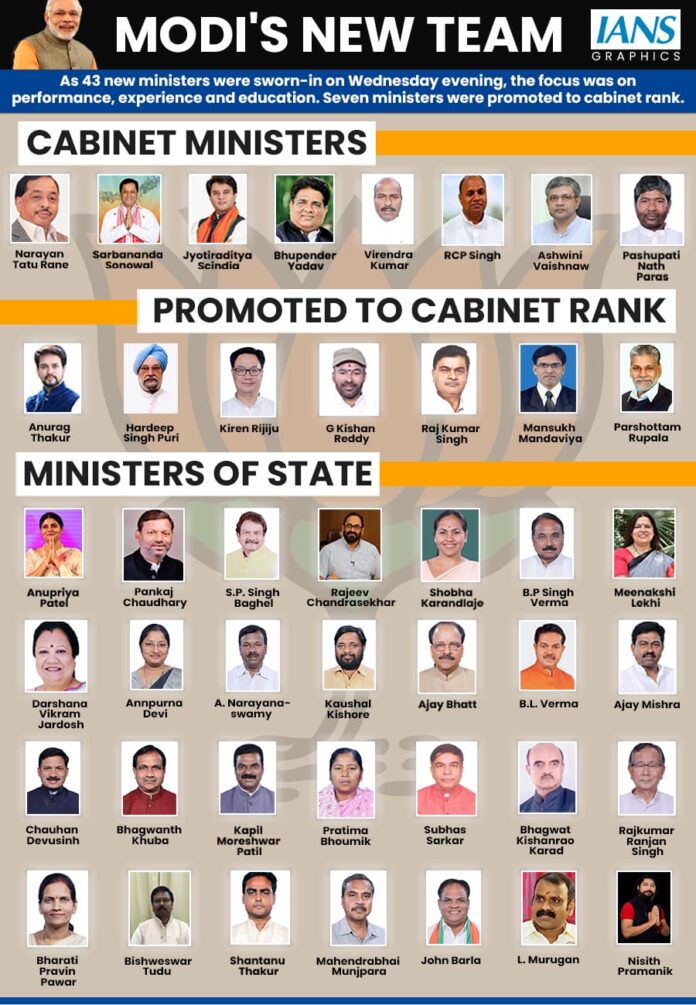 New Delhi– A largely new team of ministers will take charge of bringing the Covid-ravaged economy back on path of revival with the Modi government on Wednesday effecting major changes in the portfolio of ministers of prime economic ministries.

While Piyush Goyal has now been given additional charge of Textiles along with his Commerce and Industry and Consumer Affairs, and Food and Civil Supplies portfolios, Urban Affairs Minister Hardeep Puri will now also take charge of the Petroleum and Natural Gas Ministry.

In the reshuffle, both ministers have also lost out on one of their earlier portfolios with Goyal losing Railways that will handled by Ashwini Vaishnaw, who will also hold additional charge as Minister of Communication and Information Technology.

Puri has also lost out on additional charge of Civil Aviation Ministry that now goes to Jyotiraditya Scindia who joins the government after moving to the BJP from Congress in March last year.

The cabinet reshuffle has also taken the load off from Roads and MSME Minister Nitin Gadkari as the all important Micro, Small and Medium Enterprises Ministry has gone to former Maharashtra Chief Minister Narayan Tatu Rane while Port, Shipping and Waterways Ministry will now be looked by another former Chief Minster Sarbananda Sonowal, of Assam.

Dharmendra Pradhan, who held the charge as Petroleum Minister in the two terms of Modi government so far, is now the new Education Minister. He continues to hold the charge of the Skill Development Ministry.

The rejig comes at a time when India’s growth has been heavily dented by the second wave of Covid. At present, major multilateral organisations have cut India’s growth rate for FY22.

The performance of key economic ministries are expected to hold the key to bring back Indian economy on the growth path.

While changes have been made in several key ministries, Nirmala Sitharaman continues to hold all important charge of the Finance Ministry along with the Ministry of Corporate Affairs. It is expected that new ministers would hold several round of talks with her in coming days to give inputs on next phase of economic stimulus that would be required in coming days. (IANS)