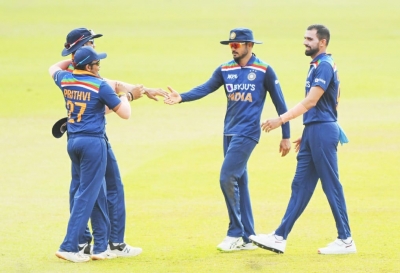 The latest being Deepak Chahar, who put up a fabulous performance against Sri Lanka in the second One-day International. He scored an unbeaten 69 to take India to victory from a position that looked difficult. Deepak was not known for his batting and with a highest score of 57 in 45 first class matches, one would never proclaim him to be a batsman.

India have, through the two wins in Sri Lanka, won the ODI series and so the final match may have some new faces as India would look to bring in further young blood.

The Indian team was considered as a second grade team by Sri Lanka’s former astute and successful captain, Arjuna Ranatunga. The defeat of their side shows either the good health of Indian cricket or the downfall of Sri Lanka. The latter seems to be more the reason as the Sri Lankan side has not seen a series win for quite a while.

Both coach Mickey Arthur and Sri Lankan captain Dasun Shanaka gave the impression that they were novices where simple cricket thought processes were concerned.

The Sri Lankans also lacked confidence and when they were put under pressure, they just succumbed to it. One wonders, at times, whether a foreign coach, with the lack of cultural and local knowledge, is the correct solution to get the best from the cricketers of today.

On the other hand, India in recent times seem to have risen from a position of despair. Unsung heroes have come forth with performances way beyond their ability. One wonders the reason for this change and as to how this has come about in Indian cricket.

The Indian Premier League (IPL) has definitely played a major part in this. The T20 format has given the players a superb platform to express themselves. They have been able to experiment and master innovative skills in both batting and bowling. Having seen, imbibed and tasted success, players have been able to implement them in all formats of the game.

The second reason is that the IPL has brought in international and domestic professionals who have brought in processes that cover all physical and mental areas of the game. An Indian cricketer is now a full-fledged cricket professional whose life is cricket and nothing else.

However, the reason behind change in attitude of Indian cricketers is financial security. That is why the young and old cricketers are bolder in their approach. With money taken care of, an Indian cricketer is focussed just on his game. The plethora of cricket being played internationally and domestically is also giving each one of them ample opportunities to shine or return even after failing. Substantial income is still rolling in for even failed players to ensure they continue playing and persevering in the game.

The aggressive and brash way in which the young cricketers approach the game makes one wonder as to how both the coaches, Ravi Shastri and Rahul Dravid perceive it. Both of them were cricketers who played cricket sedately with the least amount of risk. They both had a very strategic and careful approach and were known for their patience. One wonders, therefore, as to how their basic characteristics have not rubbed off onto most of the present cricketers who seem to be playing their cricket in the manner opposite to how the two coaches played.

One was amazed to read as to how, on his debut, Ishan Kishan made a statement to his colleagues in the dressing room that he will hit the first ball he faces for a six. The fact that he did so was quite an achievement in itself, maybe the reason was for him to emulate Rishabh Pant who did this in his debut Test match. Although, Ishan went on to make a half-century, he gave one the impression of being unreliable. He is a player, similar to Prithvi Shaw, blessed with immense talent and sublime timing in his stroke-play but they need to be selective in their approach. One feels that the Indian team has now a cupboard full of superbly talented cricketers who need to be nursed to perform consistently.

Indian cricket can boast of three teams that could represent them in International cricket. The success of a side is when they bring trophy to the table in an ICC tournament. This is when the top teams vie against each other. India may have a heap of cricketers but at the end of it, it was New Zealand who prevailed in the World Test Championship final. The last time India won an ICC trophy was in 2013 when they clinched the Champions Trophy. This shows there is a major lacuna in the system that prevents India from winning when most needed.

This is where one feels that Indian cricketers lack the basic cricket intelligence and the capabilities of adapting to the situation when it comes to a crunch situation on a world stage.

This has been the tale in all the World Cup formats played in the last eight years and the reason given is either the difficult conditions or their present aggressive approach.

The time has come for Indian cricketers to look beyond their personal triumph and look holistically towards the team’s success. They have done so successfully in Australia, India and recently in Sri Lanka. One hopes that they can reproduce the same attitude in the T20 World Cup in the UAE in October 2021. A trophy to adorn the mantle-piece is just what a billion Indian followers and well-wishers are craving for. On winning it only will one honestly be able to say that Indian cricket is a complete success. (IANS)