For Sunny Leone “cycling is the new glam”

Mumbai– Sunny Leone took to Instagram on Thursday to share her glam quotient. She posted pictures posing near a bicycle and talked about taking one’s health seriously.

“When it’s finally crossed 100… you gotta take care of your health!! #Cycling is the new #GLAM,” she wrote.

In the pictures, the actress wears a red dress and red heels.

In the past, too, Sunny has shared her love for cycling on social media.

Sunny’s upcoming projects are “Shero” and “The Battle Of Bheema Koregaon”.

Kunal Kapoor brightens up weekday with his new post

Mumbai– Actor Kunal Kapoor took to social media on Thursday to declare he is shining bright and on fire!

“Ho, ho, ho, I’m on fire #shinebright,” wrote Kunal Kapoor with a picture he posted on his Instagram page.

In the sunny bright picture post, the actor is seen posing in a white T-shirt, sporting beard and long hair.

The actor was last seen in the film “Koi Jaane Na” on OTT.

Off screen, Kunal is the co-founder Ketto, Asia’s largest crowdfunding platform that raises money for social and individual causes.

Rasika Dugal posts a throwback picture of her first photoshoot

Mumbai– Actress Rasika Dugal took to social media on Thursday and shared a picture of her first photoshoot.

“Throwback to my first portfolio shoot in Bombay. I remember saving up money for a few months before I could get this done. Finally managed because of that one ad shoot I got after doing a million auditions… running to them in between theatre rehearsals,” she wrote.

In the post, she thanked her photographer and the people who helped her in her decade-long journey as an actor.

“I was mostly confused and lost (well some things don’t change) about what I wanted from the shoot. Thank you @manmeet_bhatti_photography for helping me through this with so much calm and care,” she added.

“It has been a crazy decade and more ever since… an abundance of experiences… and the unexpected kindness of so so many,” wrote Rasika.

In the picture, Rasika is seen wearing a satin dress with long hoop earrings.

The actress will be soon seen sharing screen space with Naseeruddin Shah in “The Miniaturist Of Junagadh”. 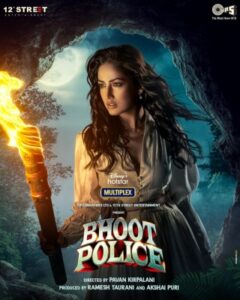 Yami shared a photo on Instagram where she can be seen standing in a cave at night holding a torch. Fire from the burning torch lights up her face in the dark.

“To enchant all with her charm arrives MAYA, in #BhootPolice. Coming soon on @disneyplushotstarvip,” the actress captioned the photo.

Yami recently tied the knot with “Uri: The Surgical Strike” director Aditya Dhar. “Bhoot Police” will be her first release after wedding.

Produced by Ramesh Taurani, Akshai Puri and co-produced by Jaya Taurani, “Bhoot Police” is slated to release on Disney+ Hotstar.

Kangana offers a glimpse of her ‘Dhaakad level fitness’

Mumbai– Actress Kangana Ranaut took to social media on Thursday to share a photograph that shows her performing yoga.

Kangana is currently shooting for the action thriller “Dhaakad” in Budapest along with actor Arjun Rampal.

“Got my passport…. Thanks to everyone for their concern and best wishes … Chief I will be with you all soon @razylivingtheblues #Dhaakad,” Kangana recently posted on Instagram before flying to Budapest.

Kangana will be seen as Agent Agni in the Razneesh Ghai directorial, while Arjun will be portraying the antagonist Rudraveer.

The film’s first schedule was shot in Madhya Pradesh.

Kangana also has the Jayalalithaa biopic “Thalaivi”, the period drama “Manikarnika Returns: The Legend Of Didda”, and the action film, “Tejas” lined up.

She will don the director’s hat for “Emergency”, a film based on the life of India’s former Prime Minister Indira Gandhi. (IANS)