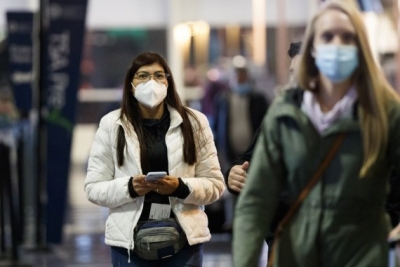 Washington– Covid-19 pandemic decreased life expectancy in the US by 1.87 years, between 2018 and 2020, a drop not seen since World War II, according to new research.

The numbers are even worse for people of colour. On average, whereas life expectancy among white Americans decreased by 1.36 years in 2020, it decreased by 3.25 years in Black Americans and 3.88 years in Hispanic Americans, revealed the research published in the journal of the British Medical Association.

“It’s like nothing we’ve seen since World War II. 1943 was the last time the US had such a large decrease in life expectancy,” said lead author Steven Woolf, and director Virginia Commonwealth University (VCU) Center on Society and Health.

The US had among the world’s highest per-capita mortality rates due to Covid. Black and Hispanic communities were hit harder than white populations. The US death toll has surpassed 600,000, according to Johns Hopkins University’s Coronavirus Resource Center.A

“The disorganised handling of the pandemic in the US had a lot to do with governance,” said Woolf.

“Our Constitution delegates public health authority to states, so we had 50 response plans. Many lives were lost because so many decisions were driven by politics and ideology. Covid-19 exposed a lot of the systemic problems that have been fuelling the long-term decline in the health of Americans,” he noted.

It is well-known that Covid-19 had a disproportionate impact on people of colour, but the effect on life expectancy for those groups was “jolting,” Woolf said. Life expectancy in Black men in particular reached its lowest level since 1998. (IANS)