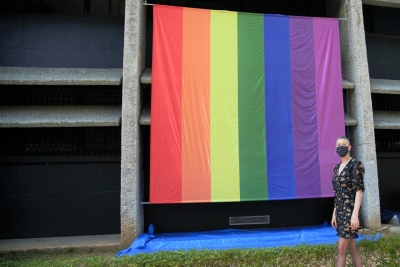 Chennai– The US Consulate General in Chennai on Thursday hoisted the rainbow flag over the consulate building to commemorate Lesbian, Gay, Bisexual, Transgender and Queer (LGBTQ) Pride Month.

The consulate will also virtually screen a documentary film — ‘Share’ — for the students, emerging filmmakers, activists, and others interested in LGBTQ issues on June 30.

US Consul General, Judith Ravin, said that the rainbow flag, which will remain on display through the month of June, highlights the commitment of the US to the human rights of LGBTQ persons and communities.

The documentary film ‘Share’ follows a young Asian-American Instagram influencer as he struggles to reveal his gay identity to his traditional family. The film will be virtually screened with the support of American Film Showcase, a statement from the US Consulate said.

The screening on June 30 will be followed by a panel discussion with ‘Share’ filmmakers Barna Szasz and Ellie Wen and actor Tim Chau.

The American centre will also curate a suggested reading list on Pride-related themes. A virtual panel will be hoisted on the theme ‘Recognising Pride in American Literature’.

People interested in either of the programmes may send an email to ChennaiAmCenter@state.gov.

The Pride Month is celebrated in June in the US to honour the Stonewall Uprising in New York City that took place in June 1969. This event was a game-changer for the modern-day Gay Liberation Movement in the US, paving the way for future activism and legislation. (IANS)