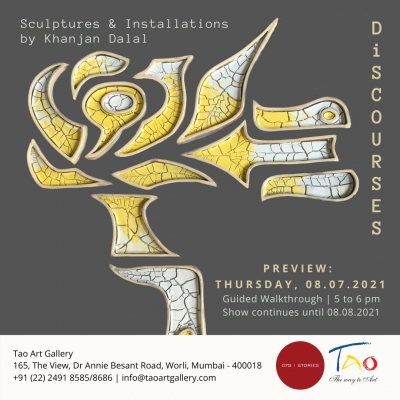 New Delhi– Khanjan Dalal’s recent body of works looks into a variety of serious issues with a twist of wry humour. For this exhibition at Tao Art Gallery, he adopts the Foucauldian format of the ‘discourse’ to thread together and bring into view his varying concerns expressed through his practice. Discourse is, thus, a way of organising knowledge that structures the constitution of social and progressively global relations through its collective understanding.

In the first section of works, Khanjan’s discourses take the format of speech bubbles in different shapes and formats, from punctuation marks to floral formats, he freely borrows from popular culture and the millennium format of chat boxes to the point where the speech bubbles actually form a third entity like hybrid creatures. Besides giving rise to these mystical creatures Khanjan also talks about the fragility of our conversations.

The wall-mounted sculptures made from gas fired ceramics references our hyper-connected world, and the cacophony of the fibre-optical universe, which often leads to a glut of information. Even when every conversation remains forever recorded in cyberspace, the proliferation of these conversations often renders them blank or void.

Is Khanjan reclaiming these orphan texts with his mythical, fairytale creatures? We are left to contemplate this while we enjoy the forms on a purely visual level.

The second section is titled the Armour series. The muscular male busts are intended to evoke and draw upon the depiction of masculinity. For much of history, muscles have been seen as vulgar, meaty indicators of labour and in some instances virility. Khanjan adds another layer of humour and irony to his sculptural work for they are placed on a pedestal that has a cow bell hidden under the torso, which could be rung by pulling the thread which the viewer can engage with. Underneath this playful veneer is a serious critique of various manifestations of masculinity.

It talks about this idea of Bushido or the way of the warrior, whose central tenets are honour and freedom from fear of death.

Khanjan’s work probes and examines the folly behind heroism, the gloom around the glory, and questions the grandstanding of patriarchal machismo that focuses on the idea of revenge, suicide and violence through Chushingura also known as 47 ronin or the Ako incident, a 15th century Japanese Fable.

Catharsis is an important part of his work; it enables “purification” or “cleansing” of certain emotions, primarily fear and dishonour, from the subconscious mind. In the realm of art, it takes on a physical expression.

Together these three sections underline Khanjan’s concerns and create a landscape through which we may navigate an alternative masculinity, not just in the Indian context but through a pan Asian lens that examines the follies of mankind in the times of tribulation and trial that we are currently living through. (IANS)