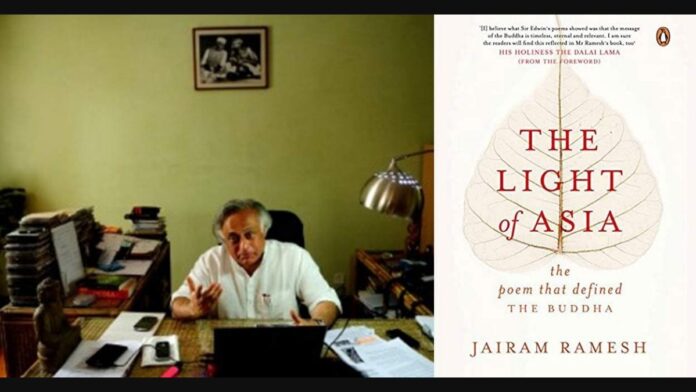 New Delhi– This surely is a labour of love as economist-author-politician Jairam Ramesh painstakingly unveils the myriad nuances of Edwin Arnolds “The Light of Asia”, originally published in 1879, that has done much to shape the ideas of people around the world on the life of the Buddha but also had a profound impact on Mahatma Gandhi, Jawahralal Nehru, Rabindranath Tagore, Swami Vivekananda, and even Winston Churchill, as also five Nobel laureates. It also served as the basis for one of Indias first silent films and figured in a Hollywood classic.

“The Light of Asia” has been translated into 13 European, eight North and South East Asian and 14 South Asian languages. A number of plays, dance dramas and operas were adapted from it in different countries. “In the last fifty years, it has continued to evoke academic interest and has become the subject of doctoral dissertations and scholarly publications in the UK, Canada, USA and Germany. The most recent of these came out in February 2020 and dealt with its influence on James Joyce,” Ramesh writes in “The Light of Asia — the poem that defined The Buddha” (Penguin/Viking).

Arnold’s book “did much to shape the ideas of people across the world regarding the life of the Buddha. There was a mania for it for years after its publication. Its author was no great scholar but achieved what no scholarly work was able to. Its impact on the Western world, at least till the end of the first quarter of the twentieth century, has been recognized and written about”, Ramesh states.

“Far less understood and appreciated is its enduring appeal outside the UK and the USA, especially in the Indian subcontinent. This appeal worked in different ways — through the influence it would have on prominent public personalities, through translations into numerous languages and through its use in diverse art forms. It inspired social reformers and also led to Buddhists having an equal say in managing the site of the Buddha’s enlightenment, which they had not had for many centuries past,” the author maintains.

On its release, Ramesh writes, it immediately took England by storm, and soon thereafter America and Europe too were stirred by it. The epidemic of exuberance for it would spread to other parts of the world and last a few decades. “The book captivated an Indian monk who remains an iconic personality –Swami Vivekananda. At about the same time, it deeply moved a young man in Colombo who has become famous in history as Anagarika Dharmapala. It caught the attention of an aspiring Indian lawyer in London in 1889. This man later became immortal as Mahatma Gandhi. A few years hence it impacted a teenager in Allahabad who would, in 1947, become the first Prime Minister of India, Jawaharlal Nehru. Two copies of the book adorned the bookshelves of B.R. Ambedkar, the prime architect of the Indian constitution. It informed the work of men who were active in the movement for social justice, especially in south India in the early part of the twentieth century”.

The book had a marked influence on at least 11 literary personalities from across the world. Five of them were Nobel Laureates: Rudyard Kipling, Rabindranath Tagore, W.B. Yeats, Ivan Bunin and T.S. Eliot in 1948. The other six are legendary figures: Herman Melville, Leo Tolstoy, Lafcadio Hearn, D.H. Lawrence, John Masefield and Jose Luis Borges. It opened new frontiers for Joseph Campbell later to become one of the world’s leading authorities on comparative mythology. The world of science and industry was not immune to its reach either.

At the turn of the nineteenth century, it shaped the life of a young science student in Madras who would, in 1930, become India’s first Nobel Laureate in Physics, C.V. Raman. The Russian chemist and inventor of the periodic table Dmitri Mendeleev and the Scottish-American industrialist-philanthropist Andrew Carnegie had a special affinity to it. An extremely controversial figure of the British military but a hero during his time, Herbert Kitchener, would carry this book along with him wherever he went. It figures prominently in the private library of Alfred Nobel, the Swedish businessman who later endowed the Nobel Prizes.

In 1925, it was to serve as the basis for one of India’s first silent films (‘The Light of Asia’), made by a German-Indian team. This was released internationally to some acclaim. In 1945 it figured in a Hollywood classic, “The Picture of Dorian Gray”. In 1957, a very ill Raymond Chandler, the British-American detective storywriter, received a letter from his long-time secretary advising him to take solace in reading this book, Ramesh writes.

“Sir Edwin Arnold was a man of his times, firmly anchored in late Victorian society, a quintessential British imperialist but deeply in love with other cultures, most notably Indian and, towards the end of his kaleidoscopic life, Japanese as well. Not a scholar, strictly speaking, he contributed hugely to popularizing the classics of Indian philosophy and literature at a time when they were little known.

“The enduring fascination that Mahatma Gandhi had for his translation of the Bhagavad Gita (‘The Song Celestial’) is sufficient for Sir Edwin Arnold to occupy a distinctive niche in not only Indian but also world history. If you add to this the prodigious influence ‘The Light of Asia’ had, then it would be fair to say he was a poet who helped interpret not one but two faiths — an achievement that is quite extraordinary by any yardstick,” Ramesh writes.

The one thing that connects “The Song Celestial” with “The Light of Asia”, Ramesh notes “is the sacredness of the pipal tree. This is the tree under which the Buddha meditated and attained enlightenment. This is also the tree whose divinity is extolled in the opening six verses of the Bhagavad Gita”.

“The Light of Asia”, Ramesh writes, came at a time when organized religion was in retreat in Victorian society and was under attack across the Atlantic as well. It came exactly ten years after the word ‘agnostic’ was first coined. “To use the title of Thomas Hardy’s extraordinary poem, Arnold placed Buddha in the public consciousness at a time when ‘God’s Funeral’ was taking place.”

The message of “The Light of Asia”, that the Buddha said he was no God and preached a “religion of humanity”, free of dogma and based on reasoning and self-discovery, “resonated loudly. Because it was such a spectacular success in the UK and America, educated elites elsewhere too took to it enthusiastically. The Light of Asia did not involve painstaking academic investigation”.

But clearly, “it met a demand, fed a hunger, filled a need and fulfilled an aspiration. It had something for everybody. It appealed to the Christian non-missionary world because of the close parallels in it between the lives of the Buddha and of Christ. It made Buddhists feel proud because it portrayed the founder of their faith in a glorious manner”, Ramesh writes.

The King of Siam, for example, could use it to counter the growing influence of English and French missionaries in his kingdom. Upper-caste Hindus in India did not see it as a potent threat because of the extensive use of Brahminical themes, the author states.

On a personal note, Ramesh writes: “Speaking for myself, I am not a Buddhist nor am I a practitioner of Buddhism. I do not belong to the community of scholars of Buddhism. But the life of the Buddha has always interested and continues to captivate me. The life of the Buddha is hardwired into the mind of every Indian. What we don’t realize is how much the popular imagination of that life was moulded by ‘The Light of Asia’. That, more than anything else, has been the motivation for this book written in the form of a story.

Arnold’s “The Light of Asia” is in “eight books of blank verse, with some five or six hundred lines in each”.

Book the First deals with the birth, boyhood and childhood of Siddartha and contains 436 lines.

Book the Second concerns his teenage years leading up to his marriage to Yasodhara and has 515 lines.

Book the Third is about the luxurious life he leads as a husband and father but also with his growing doubts after seeing an old man, a sick man, a corpse and a wandering ascetic. It has 601 lines.

Book the Fourth deals with his Great Renunciation and the beginning of his search for the cure to the ills of human existence. This is covered in 568 lines.

Book the Fifth elaborates on his self-mortification in the company of wandering ascetics and has 560 lines.

Book the Sixth explains his disenchantment with selfmortification as a solution, his partaking of Sujata’s gift of milk to end his starvation and his attainment of Buddhahood under the Bodhi tree. Not surprisingly, it is the longest and has 780 lines.

Book the Seventh deals with his father’s grief, his wife’s anguish and his son’s bewilderment at his absence, his homecoming and their recognition of what he had accomplished. It has 520 lines.

Book the Eighth is the easiest to read, with 611 lines, and goes over the establishment of the order of the monks and expositions of the Buddha’s teachings and doctrines. It is probably the most powerful section of the entire poem. In all, there are 5300 lines and 41,000 words in “The Light of Asia”.

Ramesh concludes on a philosophical note.

“Alexander Pope had a wonderful epitaph for Isaac Newton: Nature and nature’s laws lay hid in night; God said ‘Let Newton be’ and all was light.

“A similar epitaph for Arnold may well have been: Buddha and Buddha’s teachings lay hid in night; God said ‘Let Edwin Arnold be’ and all was light.

“Ultimately, I believe that ‘The Light of Asia’ became the cultural phenomenon it did because it focused on the Buddha’s humanity, instead of his divinity”. (IANS)