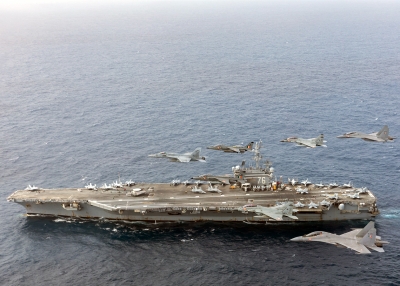 New York–The Indian Navy and Air Force deployed their arsenal of both Russian and Western-made aircraft during the joint exercises centred around the aircraft carrier USS Ronald Reagan in the Indian Ocean to ‘build on the high-calibre integration’ between the two nations, according to the US Indo-Pacific Command (PACOM).

“Our nations share a common interest in a secure Indo-Pacific,” Rear Admiral Will Pennington said.

The joint drill was held on Wednesday and Thursday, when the USS Ronald Reagan, which is based in Japan, was on its way to the North Arabian Sea in preparation for the US withdrawal from Afghanistan. After that, the US Navy held a separate exercise in the region with Sri Lanka and Japan, PACOM said.

The India-US exercises that “reinforced the converging maritime interests” of the US and India followed last month’s meeting between US Defense Secretary Lloyd Austin and Indian External Affairs Minister S. Jaishankar at the Pentagon during India’s first cabinet-level visit to Washington after President Joe Biden took office, the PACOM said.

The Indian Defence Ministry said on Friday, “The exercise has been a key enabler in building interoperability and strengthening the defence coordination between the two nations and witnessed high tempo-naval operations at sea.”

“The exercise has been another milestone in strengthening cooperation between the two countries and reinforcing the shared values as partner militaries, in ensuring freedom of seas and commitment to an open, inclusive Indo-Pacific and a rules-based international order,” the ministry said.

PACOM added that aerial exercises like dissimilar aircraft combat training (DACT), detect-to-engage sequence and formation manoeuvering were are also part of the exercises.

The Ronald Reagan Carrier Strike Group known as CSG 5 that participated in the exercise deployed the US guided-missile cruiser USS Shiloh and guided-missile destroyer USS Halsey, as well as aircraft from its Carrier Air Wing, according to PACOM.

The US Naval Institute News reported on Friday that the USS Ronald Reagan was in the North Arabian Sea to support the US withdrawal from Afghanistan.

This was the second US-India naval exercise this year as strategic cooperation flourishes between the two countries.

US Navy’s USS Theodore Roosevelt Carrier Strike Group had held exercises with the Indian Navy and Air Force in the Eastern Indian Ocean Region in March. It followed Austin’s visit to India, the first cabinet-level trip in Biden’s administration.

The US Navy also held an exercise with Sri Lanka with the participation of Japan “focused on building interoperability and strengthening relationships”, PACOM said.