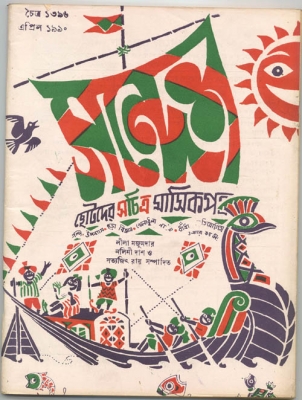 New Delhi– An online exhibition presenting a selection of Sandesh covers, illustrated by Satyajit Ray, is on view from June 14-27, as part of the centenary year celebrations of the legendary filmmaker, writer, illustrator and music composer. Sandesh (meaning both information as well as sweetmeat), is the iconic Bengali children’s magazine started by Ray’s grandfather, Upendrakishore Raychaudhury in 1913.

A prolific illustrator, as Editor of the magazine, Ray painted and designed each of the covers in addition to contributing his own stories, creating riddles, puzzles, and editing and illustrating other contributors’ works.

Satyajit Ray was a multifaceted genius who will be remembered as much for his graphic designing and illustrations as for his storytelling prowess. He was a great artist first, well before he made his name as a filmmaker. He designed book covers, film posters, illustrated children’s books and had a mastery over calligraphy and typography creating numerous new fonts in Bengali and four Roman fonts, receiving an award for designing the typeface for Ray Roman.

Ray’s artistic work reflects a sophisticated experimentation with various artistic styles and traditions, both local and foreign, without compromising on aesthetic or authenticity. Throughout his career, sketching, graphic design and calligraphy merged seamlessly with his filmmaking.

In 1961, Satyajit Ray relaunched the children’s magazine Sandesh that was originally founded by his grandfather. To make the magazine more appealing to children, Ray created all the illustrations, including the covers. The cover designs incorporated colourful geometric and floral patterns in saturated primary colours with lines and textures similar to wood block printing.

Often using different folk motifs, motifs from traditional day-to-day rangolis (in Bengal, alpana) or the ‘pattachitra’ style of narrative painting. Experimenting with creative illustrations, he created four comic strips for Sandesh. However, these comic strips were ‘silent’, the characters did not converse with each other, leaving the narrative to the readers imagination.

Constantly experimenting, using ink and pen, pencil, watercolours and ordinary poster paint in different stylisations, Ray’s illustrations are striking in the way they marry playfulness with strong lines. For readers, every cover of the magazine was a constant source of surprise and delight, as with each issue, Ray played around with the word ‘Sandesh’ using different calligraphic and typographical styles.

Since the time of its publication, Sandesh was usually printed in the standard size of 7.5 inches x 9.5 inches. However, for a few years from 1970 to 1973, Ray experimented with a new size as an innovation to try and inspire a child’s imagination. For these three years, it was published as a bimonthly magazine and for the first time in the history of juvenile periodicals in the large format of 13 inches x 10 inches.

In subsequent years, the magazine reverted back to the original size. Since Satyajit Ray’s passing in 1992, Sandesh continues to be published with his son Sandip Ray at the helm and is now also available online. The covers remain those created and designed by Satyajit Ray during his lifetime.

To mark Ray’s 100 years, a series of programmes will be organised in virtual and physical mode throughout the year. The programmes will include exhibitions, films — documentary and features, talks and discussions to try to present both the known and lesser known aspects of Satyajit Ray. (IANS)