Bhumi to star alongside Akshay in ‘Raksha Bandhan’

Taking to Instagram on Wednesday to make the announcement, Bhumi shared an image, where she can be seen sitting alongside Akshay and filmmaker Aanand L. Rai.

“A very special film and a very special reunion. Am supremely excited to be collaborating again with two of my favourite creative powerhouses & humans. Am full of gratitude to be a part of this special, heart-touching story,” she captioned the image.

Akshay, who shared screen space with Bhumi in the 2017 film “Toilet: Ek Prem Katha”, welcomed her on board.

Sharing the same picture on Instagram, the actor wrote: “When you are happy, it shows. And indeed we are to have @bhumipednekar onboard #RakshaBandhan.”

Announced last year on the occasion of Raksha Bandhan, the movie revolves around the brother-sister bond. Other details about the film are still under wraps.

You can buy everything with money but not your life and time: Arun Mandola

Mumbai– Actor Arun Mandola feels it is very important for all Indian citizens to not delay getting vaccinated, as he emphasised on following the correct process to ensure that everything falls in place and the country becomes Covid-free soon.

The actor said this pandemic has made us think about life and death in a new way, besides making us understand the importance of taking care of our loved ones and our health.

“You can probably buy everything with money, but not life and time. If you want to survive right now, you should be very careful about your physical and mental health. Eat right, drink water, do yoga and meditation for better health,” he told IANS.

Supporting the government’s move on vaccination, he said: “The government has taken the right decision by initiating the process with frontline workers, then the older generation and then opening the slot for 45 years and above and now it’s 18 years and above. Next would be children. We need to follow a process to make things work.”

Arun is yet to take his first dose though.

“The main reason I did not take the vaccination yet is because I feel there are lots of people who need to step out daily, so they should get it first. I can take it later. I want to act responsibly. So, I will urge people not to step out unless it is necessary and take the vaccine as soon as possible. We know there is a shortage of vaccines, but the government is working on it,” he added. 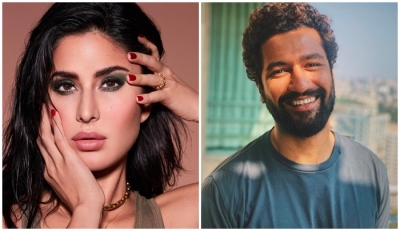 The hashtags #KatrinaKaif and #VickyKaushal started trending on Twitter on Wednesday after memes featuring the two actors started doing the rounds, with fans talking about their rumoured relationship. While some of the memes are hilarious, some are romantic.

Even though the two actors are rumoured to be dating for quite a while now, they have chosen to keep mum on their relationship status and refrain from making public appearances together.

While sharing memes featuring the two actors, fans shared their love for Vicky and Katrina and even said the two look nice together. Some fans even tweeted suggesting that the two of them should feature in a film together.

The memes started flowing on Wednesday after reports emerged claiming that actor Harsh Varrdhan Kapoor has confirmed in a recent interview that Vicky and Katrina are dating.

In an appearance on Zoom’s ‘By Invite Only’, Harsh Varrdhan was reportedly quizzed which Bollywood relationship rumour he believes to be true, to which the actor allegedly replied: “Vicky and Katrina are together, that’s true… Am I going to get in trouble for saying this? I don’t know. I think they’re quite open about it.”

Mumbai– Actress Yami Gautam has shared a new picture from her wedding celebrations on the occasion of her mother’s birthday on Wednesday.

Yami posted the picture on Instagram featuring her mother and sister posing alongside the new bride. She shared that everyday she is becoming a little bit more like her mother.

“Everyday we become a little bit more like our mother & we couldn’t be prouder! A Happy birthday mummy,” she wrote as the caption for the image, which currently has 2,37,000 likes.

Yami announced on June 4 that she has tied the knot with “Uri” director Aditya Dhar in a private ceremony.

Yami will be next seen in “Dasvi”, “A Thursday”, and “Bhoot Police” , besides a few yet-to-be announced ventures. (IANS)