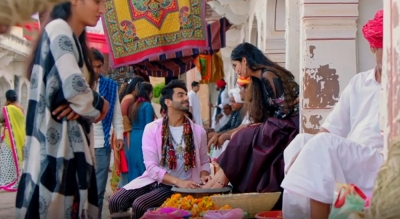 The song written and composed by Nirmaan was launched by Aparshakti on Instagram. Without saying much, he simply wrote as caption: ” #Ayajadoda”.

The actor recently announced that his wife Akriti and he are expecting their first child. He had uploaded a picture kissing his wife’s baby bump. He had captioned the picture as: “Lockdown main kam toh expand ho nahi paya toh humein laga family hi expand kar lete hain (no increase in work during lockdown, so we thought of expanding the family) #PreggerAlert,” he had written.

On the work front, the actor will be seen in the film “Helmet” alongside Pranutan and the series “Stardust”.

Mumbai–  Bollywood veteran Dilip Kumar was discharged from Hinduja Hospital in Khar on Friday, his official Twitter account informed fans. The actor had been admitted on June 6 after experiencing breathlessness.

A tweet on the microblogging site read: “With your love and affection, and your prayers, Dilip Saab is going home from the hospital. God’s infinite mercy and kindness through Drs. Gokhale, Parkar, Dr. Arun Shah and the entire team at Hinduja Khar. –Faisal Farooqui #DilipKumar #healthupdate.”

The senior actor’s wife, actress Saira Banu, was seen with him while leaving the hospital. She had earlier requested fans to not believe in rumours about his death. In a note posted on Dilip Kumar’s Twitter account a few days ago, she had said: “Past few days my beloved husband, Yousuf Khan, has been unwell and recuperating at a hospital in Mumbai. Through this note, I want to thank all of you for keeping him in your prayers and for all the love and affection. My husband, my Kohinoor our Dilip Kumar Sahab’s health is stable and doctors have assured me that he should be discharged soon.”

Requesting netizens to not pay heed to rumours, the actress further wrote: “I urge you not to believe in rumours. While I ask you to pray for Sahab’s health, I am praying that the almighty keep all of you safe and healthy during this pandemic.”

This was the second time in a month that Dilip Kumar was admitted to hospital.

Mumbai– Actress Kajal Pisal, who was lately seen in the shows “Naagin 5” and “Durga: Mata Ki Chhaya”, is keen to return to the set. The actress was down with Covid in April, which impacted her work schedule and she could not take up new projects.

“I have recovered from Covid-19 completely and am keen to start shooting and take up an interesting new show. I have started giving auditions and hope to join a new show as soon as possible,” says Kajal.

The actress says she is open to working in digital platforms, too. “After being part of the TV screen for a decade now, I wish to make my debut on the digital platform. While recovering from Covid, I got addicted to some shows on OTT. They are practical and one can relate easily. As an artiste I got influenced to do such beautifully scripted real roles,” she points out.

She adds: “Most of the time, on TV we get to play roles that are similar. If you play a positive role, then you are always too ‘bichari’ (the victim) and if you play something grey then it is just too evil. In this regard, OTT as a platform gives you the opportunity to play normal characters. They are neither heavily evil nor too innocent. They look fun and challenge actors too.”

Kajal is known for her roles in television series such as “Bade Achhe Lagte Hain” and “Saath Nibhana Saathiya” among others.

Mumbai– Actress Bhumi Pednekar is working on her stamina after recuperating from Covid-19.

Bhumi flaunts post-workout glow in a picture on Instagram, where she is seen wearing a sports bra and yoga pants.

The actress recently announced she would be star alongside Akshay Kumar in the upcoming film, “Raksha Bandhan”.

She also has “Badhaai Do” with Rajkummar Rao and “Mr Lele” with Vicky Kaushal lined up for release.

Ileana D’Cruz is stretching into end of the week

Mumbai– Actress Ileana D’Cruz is already in the mood for her weekend unwind, going by her new Instagram post on Friday.

In an image she posted from a photoshoot, the actress is seen stretching her back as if gearing up to unwind. She is dressed in a stunning ivory cut-out blouse paired with a shirt.

“Stretching into the end of the week,” she wrote as caption.

Ileana’s latest release was the digital film “The Big Bull” starring Abhishek Bachchan. The film was loosely based on the securities scam of 1992.

She will next be seen in “Unfair N Lovely”, a comic take on India’s obsession with fair skin. The film is set against the backdrop of Haryana and features Ileana opposite Randeep Hooda. (IANS)