Mumbai– Actress Akshita Mudgal, who plays the lead role of Ishqi in the show “Ishq Par Zor Nahi”, says her dream proposal would be one made at the airport.

In the show, the male protaganist Ahaan has finally realised his love for Ishqi and is set to confess his feelings for her.

“Every girl dreams of receiving a memorable proposal from her beau. It’s one of the nicest moments in her life. Personally, I feel airport proposals are so romantic. We have grown up watching them in movies as well, where the hero goes to any length to make his feelings known to the ladylove of his life. To experience this in real life, too, must be equally exciting and thrilling. We have loved shooting for this sequence,” says Akshita.

Talking about how the two characters have developed in the show, Akshita says the audience has been anticipating their love story.

“Ahaan has finally made his feelings clear to Ishqi. It’s lovely to see both show their vulnerable side to each other. The audience have waited for this moment, and we have been inundated with messages from fans who want to know if they will end up with each other in the long term,” says the actress, of her role and show that airs on Sony Entertainment Television.

Twinkle Khanna gives glimpse of her ‘upside down’ world

Mumbai– Actress-author Twinkle Khanna treated fans to a fun picture with a witty caption on Thursday.

The actress, who recently celebrated her mother Dimple Kapadia’s birthday, posted a picture on her Instagram account where she is seen relaxing on the couch, but upside down.

Twinkle, known for her funny captions, wrote: “Sometimes you have to be upside down to see this right side up. #babatwinkledev”.

Twinkle often gives fans a glimpse of her family time. From getting face painted by daughter Nitara, to pictures of holiday with husband, actor Akshay Kumar, the actress keeps fans regularly updated!

Mumbai– Kartik Aaryan seems to be on a self-inspection trip on Thursday about his sex appeal, going by his latest Instagram selfie.

Sprinkling a dash of signature humour, he captioned his new image: “Kitna sexy dikh raha hoon (how sexy do I look)??”

The image captures Kartik striking an expression of attitude, dressed in a plain blue T-shirt.

Fans were impressed, of course. The image managed to elicit some random poetry in one fans at least: “10 rupey ki pepsi kartik sir sexy.”

A fan tagged him as “extremely sexy”.

On the work front, Kartik has two films lined up. He will be seen in “Bhool Bhulaiyaa 2”, which also stars Tabu and Kiara Advani. The actor also has the film “Dhamaka” lined up, which is slated to release on an OTT platform.

Kartik was recently in the news for his controversial exit from the Karan Johar-produced “Dostana 2”.

When Ekta Kapoor was called ‘poster girl of misfortune’

Mumbai– Ekta Kapoor, one of the producers of the 2016 film “Udta Punjab”, took to social media on Thursday to celebrate five years of the film’s release date.

Ekta recalled the amount of stress she had to go through with the film being leaked online and awaiting clearance from the Central Board of Film Certification (CBFC) and being called the “poster girl of misfortune”.

“Censor issues n then the film leaked! D maximum stress I had was that year! Second film that leaked was a month later!! Both stuck at d censors! Five flops n being called ‘poster girl of misfortune’ by my fav director. I think d only professional high point was d love #udtapunjab got! Even after the madness to d release. A movie that weaved stories of many and dropped brutal truth bombs. Celebrating #5YearsOfUdtaPunjab,” Ekta wrote on Instagram.

Mumbai– Actress Kriti Kharbanda gives a glimpse of her workout mornings, in a new post she shared on Thursday. 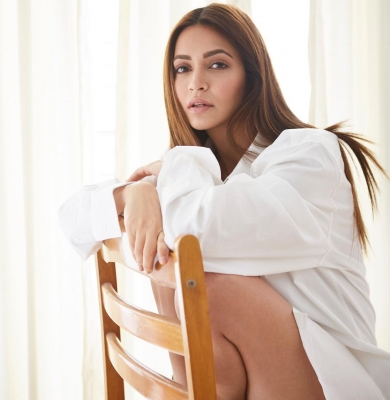 Kriti posted a picture on Instagram showing her lying down casually, flashing a smile at the camera. She is dressed in a black sports bra paired with black lycra pants, and she flaunts a post workout glow.

“Workout mornings,” she wrote as caption.

On June 12, Kriti clocked 12 years in acting. She stepped into the field of acting with the Telugu film “Boni”. Her Bollywood debut happened in 2016, with “Raaz: Reboot”.

Kriti was last seen on screen in Bijoy Nambiar’s “Taish”. She will next be seen in “14 Phere”, directed by Devanshu Singh. The film is a comedy and casts her opposite Vikrant Massey. (IANS)