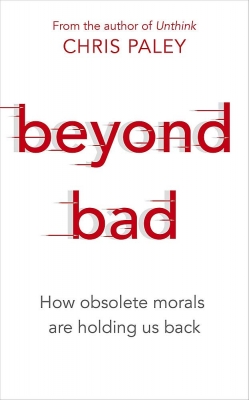 New Delhi– From Chris Paley, author of the “extraordinary”, “startling” and “thought-provoking” book “Unthink” on harnessing ones unconscious, comes “Beyond Bad” (Hachette), which contends that morals hinder us from achieving what we want to achieve in life.

Morality is the driving force in every story worth your time: Cinderella to Crime and Punishment; Macbeth to Breaking Bad. Morality’s what we’re doing when we shout at the telly, gossip about our boss or leave comments online. It’s held empires together, kept soldiers marching under fire, fed the hungry, passed laws, built walls, welcomed immigrants, destroyed careers and governed our sex lives.

But what if morality’s all meaningless rubbish, a malfunctioning relic of our evolutionary past?

This is the provocative argument that Paley makes. This isn’t an attack on one set of moral codes or one way of thinking about ethics: it’s a call for abolishing the whole caboodle (the entire sum). He uses evolutionary psychology to show how and why morality emerged: to help tribes and other small groups survive and prosper.

Our morals, he says, constrain us, bias us, and push us in the wrong direction because we fail to understand their limited aims. The biggest challenges our species face, whether global warming, nuclear proliferation or the rise of the robots, are pan-human.

These challenges are beyond what our moral minds were designed to cope with. You can’t build smartphones with stone-age axes, and you can’t solve modern humanity’s problems with tools that are designed to create primitive, competitive groups.

Chris Paley holds an MSc and a PhD from the University of Cambridge. Whilst at Cambridge, the student newspaper listed him as one of the twelve “movers and shakers’ of the year. He has written articles for The Times and the Guardian, and has 19,000 Facebook followers.

His first book was published in six languages. FHM, the lifestyle magazine wrote that it would leave you “happier than a rabbit on a carrot farm”. The late Cardinal Cormac Murphy O’Connor, archbishop emeritus of Westminster, described it as “an extraordinary thought-provoking book… quite startling”.(IANS)