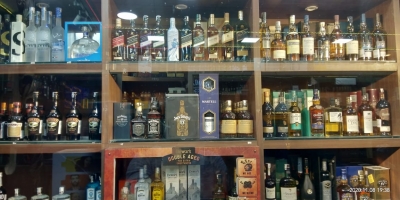 Chennai– Five armed robbers fled with thousands of bottles of Indian Made Foreign Liquor (IMFL) from a Tasmac outlet in Tamil Nadu’s Sivaganga early on Monday after overpowering the watchman and tying him to a pole, police said.

A case of dacoity has been filed against the five-member gang at the Kalayarkoil police station.

“The TASMAC (Tamil Nadu State Marketing Corporation Ltd) outlets were shut in the district as in other parts of the state following the lockdown. The supervisor at this TASMAC outlet at the Kollangudi Muthur salai had further secured the outlet by sealing the shutter using a welding machine. The department had also posted a watchman as there was a huge stock of liquor,” a local police officer told IANS.

“Watchman, Kannan 58, was tied up to a pole by the five-member gang and they broke open the TASMAC outlet and escaped with the liquor. According to the watchman, the five-member robber gang was armed and made good their escape within an hour,” the police officer added.

The watchman was found and untied by passersby after daybreak.

Top police officials visited the crime scene and fingerprint experts were also pressed into service. Police said that the three teams were formed to find out the culprits and arrest them.

The outlet’s supervisor Muthukrishnan told IANS that they had taken extra precautions including welding the shutter and appointing a watchman but the robbers had made good their escape with thousands of bottles of liquor. “We have yet to ascertain the value of the liquor stolen by the robbers,” he added.