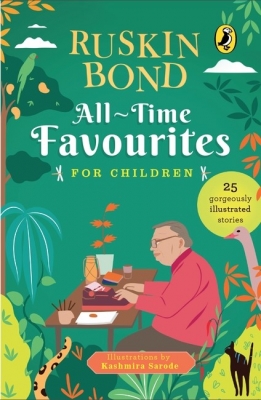 New Delhi– Ahead of his 87th birthday on May 19, Ruskin Bond, one of Indias most-loved writers of childrens stories, has carefully curated a mixed bag of 25 of his most cherished stories in a new book, “All Time Favourites for Children”, (Puffin), interspersed with excellent and quirky artwork that will evoke a range of emotions, not only among the young but also across a spectrum of readers

The collection brings together some of the evocative episodes from Bond’s life – iconic Rusty, eccentric Uncle Ken, the ubiquitous grandmother – and many other charming, endearing characters while also introducing us to a smattering of new ones that are sure to become firm favourites with readers. Heart-warming, funny and spirited, this is a must-have on every bookshelf!

The book, in fact, is the perfect complement to “A Song of India” released last July to mark the beginning of Bond’s 70-year writing career, in which he takes the reader back to 1951, his last year in Dehradun before he set sail for England and which later became the basis for his first novel, “The Room on the Roof”.

“A Song of India marks 70 years of my long writing career which began when I was sixteen. In these seven decades, I have written hundreds of stories for children and just as many for adults too, and I am still continuing to do so. I am very fortunate to have lived in a beautiful part of the country, in the mountains. I am blessed to have received inspiration from the natural world around me, from children and animals, and all of this is reflected in my works,” Bond said.

Evocative, full of anecdotes, inspiration, warmth and gentle wit, poignant yet brimming with hope and nostalgia, “A Song of India” is Part 4 of his magnificent memoirs and is bound to be one of his most enduring works for young readers in the years to come. Beautifully illustrated by Mihir Joglekar, this book is a must-have for every Ruskin Bond fan.

“The Room on the Roof”, written when he was 17, received the John Llewellyn Rhys Memorial Prize in 1957. Since then he has written over 500 short stories, essays and novellas (including “Vagrants in the Valley” and “A Flight of Pigeons”) and more than 40 books for children.

He received the Sahitya Akademi Award for English writing in India in 1993, the Padma Shri in 1999, and the Delhi government’s Lifetime Achievement Award in 2012. He lives in Landour, Mussoorie, with his extended family. (IANS)