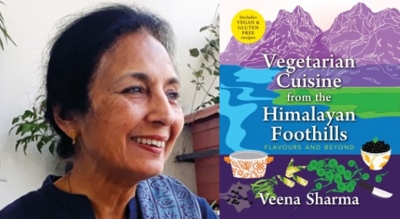 New Delhi– Author and gastronomist Veena Sharma has always believed that ones kitchen is ones best pharmacy, providing us with the particular admixtures and combinations that help uplift both our physical and mental constitutions.

“If we knew what and when to ingest certain foods into our systems, we would be infused with sacred healing that would make our bodies light and mind sharp…The moment the body is supplied with the right balance of nutrients, vitamins, and minerals, the mind becomes light and ready to delve into its own stories,” Sharma writes in “Vegetarian Cuisine from the Himalayan Foothills” (Niyogi Books).

“Due to my never-throw-away-anything mentality, my food has the quality of a melange. From this tendency arise creations that come as a surprise. I do not feel restrained due to not having this or that ingredient. Something else always serves the purpose and, at times, brings out more interesting and delectable results, leaving people guessing what it has that had been used. Rishikesh further lifted the sense of restraint, as I felt like experimenting with many of the unfamiliar-looking ingredients that I had not encountered before,” and planted the germ of the book.

“When I settled in Rishikesh, I was exposed to a huge variety of produce: be they lentils or legumes, herbs and spices or greens. That made me palpably aware of what bio-diversity actually means, and what a storehouse of nutrition it provides. That encouraged me to explore and experiment with these amazing ingredients. As I did so I also noted down the recipes that came out of those explorations.

“So, the book is a result of experimentation and is also an invitation to others to explore. It is meant to show that if I can do it anyone can do it and enjoy the process,” Sharma, a Fellow of the Indian Institute of Advanced Study, Shimla (2010-12), who also served as the Head of the Swahili Service of AIR’s External Services Division, told IANS in an interview.

About the research that went into the book, she said: “Again, it was more a personal delving into ingredients, many of which I had not been familiar with before. I also spoke with locals about those ingredients and how they would use them. Then I would give them my own preferred twist trying to best bring out their flavours, textures and colours. I also looked into other researches, many of which can be found on Google. Some I read in printed material – whatever and wherever I could find it.”

The outcome is a delectable experience for gastronomes as Sharma delves into mount-watering recipes that draw upon local bounties e some forgotten, or less used, grains and greens, spices and fruits e from the Himalayan heights. Exploring a variety of palates and creating a whole range of nutritious and tasty foods, there is an underlay of desire to retain and re-establish the biodiversity that is vital for your physical and mental health.

Not for nothing is the Garhwal region of the Himalayas referred to as edeva bhumi’, the land of the gods. The topography and climate of this sacred land has spawned a rich biodiversity of flora and fauna. Water currents carrying rocks and herbs, fed by high-altitude minerals and vegetation irrigate the soils. Steep hillsides, varied in their orientation and elevation, etched by terraced farms and fed by mountain streams produce crops suited to their particular terrains.

The book dresses and enhances this traditional produce to enrich the urban table, catering to your taste buds and nurturing your bodies and minds. Think of nutritional lentil kababs, vegetables with a twist, zesty chutneys, nourishing coups, and even extraordinary deserts like phony gulab jamuns and luscious puddings. The inclusion of several vegan and gluten-free recipes makes the book of interest to those with special tastes.

Its compact 15 chapters guide you through legumes, vegetables, savouries, vegan delights, raitas, soups, chutneys and desserts. With striking photographs and useful snippets of information accompanying each recipe, this book is sure to feed your deepest cravings.

“A thing we often ignore is that food is central to our systems – mental and physical. As we ingest nutrient-rich wholegrains and fresh produce that is seasonal and local, we supply our bodies not only with the much needed nutrition, we also strengthen its immune system, making it capable of fighting any foreign, unwanted intruders. We Indians are very good at using various herbs and spices for preparing ‘kadhas’. Many many people have been familiarising themselves with more and more ingredients for helping the system fight unwanted intruders. We should continue our search into whole grains, pulses, seeds and also consume good amounts of leafy greens – whatever is available at a given time in the year,” Sharma explained.

What next? What’s her next project?

“As a keen student of Vedanta, I have currently been engaging myself with a study of some Vedantic texts. I would be very happy to work on celebratory foods from this region. Every small area creates particular dishes to honour specific festivals and rituals. I would like to go into those and discover the reasons behind them,” Sharma concluded. (IANS)