Rasika Dugal: Beauty of the Nilgiris will always remain with me

Mumbai– Actress Rasika Dugal says shooting in the Nilgiris for her new web series “Out Of Love 2” was an exhilarating experience, and that the beauty of the place, as well as the creative exchange she had with her co-actors during the shoot, will always remain with her.

“The beauty of the Nilgiris and the creative exchange with my co- actors that I had during the shoot of season 2 will always stay with me,” says Rasika.

She is happy about the response that the show has seen upon release. “It’s always heartwarming when viewers appreciate a piece of work that you have been a part of creating. I am so grateful for that warmth, especially in times like these,” she adds.

Mumbai– Actress Seerat Kapoor has been seen in several Telugu films and is now all set to make her Bollywood debut with the psychological thriller “Maarich”. She would love exploring roles across genres — especially the period film, romance, action and the sports drama.

“As an actor I would like to explore characters that are varied. In terms of genres at this juncture, a period film sounds very interesting, as I would have the opportunity to travel through a different space and time,” Seerat said.

The actress, who is the grand-daughter of renowned acting guru Roshan Taneja, added: “I also see myself in love stories, an action thriller and lately a sports drama. The more layered the writing, the more engaging the script.”

Seerat has made a mark in Telugu cinema with her roles in films such as “Raju Gari Gadhi 2”, “Maa Vintha Gaadha Vinuma” and, more recently, “Krishna And His Leela”.

Malaika Arora: Always wished I had a daughter

Mumbai– Actress Malaika Arora says she always wished she had a daughter to share her things with.

Malaika opened up on the subject when made a guest appearance in a recent episode of the dance reality show “Super Dancer: Chapter 4”. After the performance of contestant Florina Gogoi, the actress picked up the six-year-old in her arms and spoke about how she has always wanted a daughter.

“Main tumhe ghar leke jaun kya? I have a son at home… From a long time, I have been saying, ‘kaash meri ek beti bhi hoti’. I have such beautiful shoes and clothes, and no one is there to wear them!” said Malaika and also asked for a hug and a kiss from Florina.

Florina performed to the 1980s’ number “Disco Station”, sung by Asha Bhosle. Malaika, too, joined Florina on the stage during the dance.

Mumbai– Actress Jacqueline Fernandez on Thursday pitched in to serve food amidst the Covid crisis, and later in the day posted a video where she is seen interacting with people from across India who are trying to help others cope with the pandemic.

Jacqueline’s initiatives are a part of her foundation You Only Live Once (YOLO), which she had launched on Tuesday.

Posting pictures on Instagram that show her serving food, the actress said she was “honoured” to help. She carried out her act of charity at the Roti Bank Foundation.

“Mother Teresa once said, ‘Peace begins when the hungry are fed’. I was truly humbled and inspired to visit Mumbai @rotibankfdn today, which is run by former Mumbai police commissioner Mr. D Sivanandan. Roti Bank has prepared and distributed meals to millions of hungry people till date, even during the pandemic. They are the perfect example of what #kindnessbrigade aspires to do and I am honored to be of help to them during these times. We only live once! Let’s make this life worth it by helping others in need and sharing the #storiesofkindness of those around us!” she wrote.

Later in the day, the actress posted a video where she can be seen interacting with people who are trying others cope with the Covid situation in the country.

Sunny Leone asks fans what they like to eat!

Mumbai– Sunny Leone took to Instagram on Thursday to treat her fans to a dance video. In the video, the actress is seen dancing to the song “Temperature” by Sean Paul. 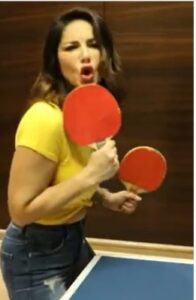 The video starts with the text: “When mom makes paneer and not tinde.”

Dressed in a yellow crop top and jeans, Sunny let her hair open in the clip. She also asked her fans what their favourite food was.

“When life gives you Paneer instead of Tinde!! What’s your favorite food?” she wrote with the video that has 1.6 lakh likes in less than an hour.

Sunny has also been encouraging her fans to follow Covid protocols and to get themselves vaccinated, through her posts on social media.

She recently teamed up with People for the Ethical Treatment of Animals (PETA) to feed 10,000 migrant workers in Delhi. (IANS)