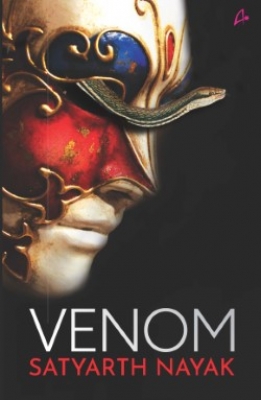 New Delhi– Is the Mahabharat an epic or is it history? Is Ashwathama, one of the seven ‘Chiranjeevis’ or immortals, a figment of past imagination or does he really continue to wander the Earth to this day? Could he really be seeking revenge on Krishna, and be willing to curse all of humanity with a deadly plague?

After writing a bestselling thriller, “The Emperor’s Riddles” and the biography of Sridevi, Satyarth Nayak is back with “Venom” (Amaryllis), a mythological fantasy-mystery set in current times.

What begins as an investigation by police officer Parag Suri and author Om Patnaik into attacks on the Who’s Who of the country quickly turns into a mind-boggling unveiling of an ancient cursed being who is hungry to execute his evil plan of retribution. What dark secrets lie hidden behind the masks of normalcy? How will the paranormal puzzle that is terrifying the city be decoded? What is the role of a seven-year-old autistic girl amidst this bewildering struggle? Why do her drawings symbolise the country’s matinee idol, Ashwin Tomar? What dark secrets lie hidden in the heart of Tomar’s secretary, Yeva?

And, what horror has taken birth in the mind of an ancient being that could forever annihilate mankind?

The writing is simple yet bold. The narrator suggests that Ashwathama is a bloody-thirsty revenge-seeker and a murderer. The story brings in personalities from the cricketing, media and business world while borrowing from numerous interesting myths and stories from folklore.

This highly-engrossing tale is for those who love mythology and thrillers.

Satyarth Nayak is an author and screenwriter based in Mumbai. His debut novel, “The Emperor’s Riddles”, released in 2014 and became a bestselling thriller, earning comparisons with Dan Brown. Nayak has also scripted Sony’s epic show “Porus”, touted as India’s biggest historical TV series.

Nayak’s short stories have won the British Council award and appeared in an anthology curated by Sudha Murthy, titled “Something Happened On The Way To Heaven”. Named one of the Top 50 authors to follow on social media, Nayak is currently scripting a web-series for Amazon. (IANS)