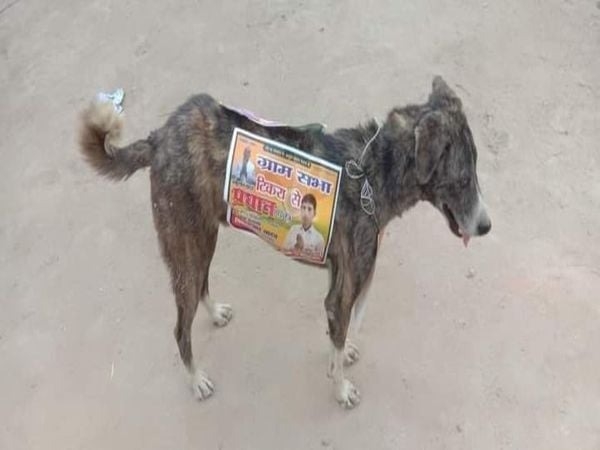 Lucknow–Campaigning in the Uttar Pradesh panchayat elections is going to dogs — literally so.

At least two candidates — one in Rae Bareli and another in Ballia district — are using stray dogs to campaign for them.

These candidates are sticking their posters and pamphlets on the dogs and letting them roam around.

One of the candidates who pleaded anonymity, said: “There is no rule in the model code of conduct which prevents us from using stray dogs in the campaign. We are not harming the animal in any way. In fact, we feed the dogs every day. It is a novel idea and the voters are attracted to such innovations.”

The photographs of the dogs with campaign material stuck on them, are going viral on the social media and have evoked strong protests from animal lovers who feel this should be a severely punishable offence. 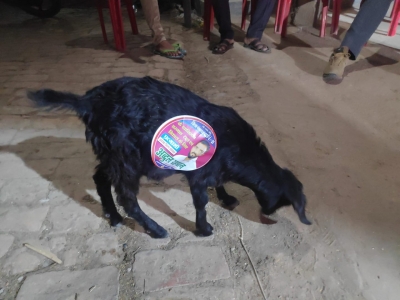 Reena Mishra, an animal activist said, “How would a man feel if similar stickers are stuck on his face during the election? Just before a dog cannot protest, we have no business to treat them in such a manner. The police should immediately take action against candidates who are resorting to this manner of electioneering.”

Meanwhile, the panchayat polls seem to have brought an unlimited supply of goodies for the voters and liquor – a staple in polls – is not included in the list.

This time, candidates are opting for other goodies.

A village panchayat candidate Sohanveer in Amroha was booked two days ago for preparing to distribute 100 kg of ‘rasgullas’ to his voters. The rasgullas were seized by the police.

In Baghpat, ten persons, including the candidate Mohd Jabbar, have been booked for getting spades and an earth mover machine to mix ingredients for ‘laddoos’ that were being made in huge quantities for distribution among voters.

A video clip of spades and the earth mover being used to mix gram flour, sugar and other ingredients went viral after which action was taken.

Baghpat circle officer Anuj Mishra, said “Investigations have revealed that Mohd Jabbar, a candidate for the post of village head, along with his supporters had made huge quantity of sweets and distributed them among the villagers, which is a violation of the model code of conduct. A video has also come to our notice, in which he has deployed an earthmover and spades for making laddoos. Jabbar and his nine associates along with a dozen others have been booked under IPC 171[E] (bribery) and 188 (disobedience to order duly promulgated by public servant).”

In Sultanpur, a zila panchayat candidate is distributing mobile phones to ‘influential persons who can turn votes in my favour’.

The candidate, who spoke on condition of anonymity, said mobile phone were an ‘useful items’ since children require them for online classes.

“This is the least that I can do for them in the pandemic,” he said.

Liquor, of course, is a staple part of campaigning in Uttar Pradesh in almost every election.

This time, however, voters are no longer accepting ‘desi daru’.

“Campaigning is becoming increasingly expensive and voters are now very specific in their demands. They are even listing their favourite brands and we have to comply if we wish to get their votes,” said a candidate in Kanpur Dehat district. (IANS)