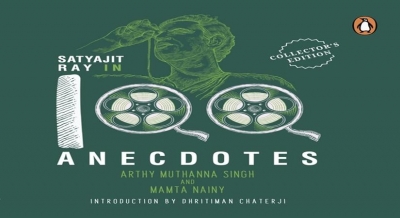 Published by Penguin, the unique book introduces the genius of Satyajit Ray and traces his magnificent life with 100 little known and inspiring incidents as well as unusual trivia. This collectible edition pays homage to the maestro on his 100th birth anniversary. A master filmmaker, a remarkable auteur, a writer par excellence and an artist of immense reach and range, Satyajit Ray was an indefinable genius. The book is a classic tribute that celebrates Satyajit’s many accomplishments across literature, music, art and more.

Following the success of ‘Gandhi in 150 Anecdotes’, this book expands the series offering an insight into the lives of iconic Indians in an accessible way. According to the publisher, this is a special edition packaged beautifully into a keepsake classic that features little-known and unusual episodes from Ray’s life. The book has gorgeous line arts that complement the text making it a perfect gift for both teenagers and passionate collectors on Ray’s centenary celebrations. (IANS)