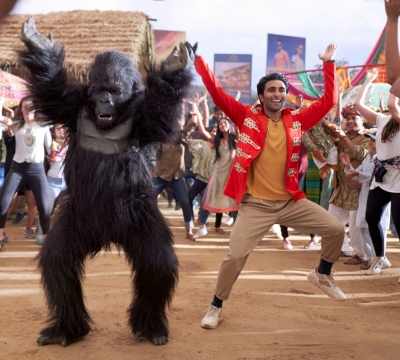 Take a good guy with no brain and a bad guy in a gorilla suit, pack them off in a truck and what do you get? A miserable excuse for mirthless slapstick, in a film that rambles down the road to nowhere.

“Hello Charlie” is one of those ‘fun films’ where you struggle to recall a single gag that was funny enough, within two minutes that the end credits have rolled. The ‘fun film’ classification should draw a ready audience base, for a start. The film — if you can call this a film — will struggle to retain audience interest thereon.

Director Pankaj Saraswat of “Hello Charlie” had once upon a time screenplayed a delightful little comedy called “Main Meri Patni Aur Woh”. That was in 2005, over a decade and a half ago. All these years later, Saraswat has chosen mindless monkey mayhem for his feature film directorial debut — the sort that stopped being funny a while back.

The Bollywood slapstick largely draws from stock formulae, banking mostly on not very witty but nonetheless funny gags to score. It takes a certain knack to pull off such a trick (random recall: Rajkumar Santoshi’s “Andaz Apna” or the numerous films Priyadarshan recreated from his old Malayalam hits, or even Indra Kumar’s “Dhamaal”). The generic prerequisite of such films is to raise the laughs, never mind being low on logic.

“Hello Charlie” has neither the laughs nor logic.

Aadar Jain is Chirag Rastogi, or Charlie, who would seem like the resident town idiot of Indore, who evidently can’t make out the difference between a real gorilla and a man in a gorilla suit. Charlie arrives in Mumbai looking for a job because there’s his father’s 15-lakh loan to repay, and lands at mamaji’s (Darshan Jariwala) place. Twist in the tale sees him transporting a gorilla in his uncle’s truck to Diu. Charlie, of course, has no clue that the gorilla is actually a fugitive on the run — industrialist MD Makwana (Jackie Shroff), who is wanted for a 4000-crore bank fraud.

Assorted characters thrown into the brainless plot, as Charlie and his cargo hit the highway, include Makwana’s girlfriend, model Mona (Elnaaz Norouzi), a dancer named Padma (Shlokka Pandit) who Charlie rescues along the way and whose sole purpose of existence in the script is an item dance, a greedy circus owner Patel (Girish Kulkarni), a drunk vet (Bharat Ganeshpure), a forest ranger called Solee Topi (Rajpal Yadav, with little actual action in the comic script), and a real gorilla that has escaped from the zoo and that seems smarter than most of the human cast.

The idea is to create comic chaos. The outcome is too forced to be comic, too lazy to be chaotic.

“Hello Charlie” is the sort of film that stands to gain due to a direct-to-OTT release. A lot of people will watch because everyone needs a dose of comic prescription in the time of curfew and Covid. The makers fritter away that advantage by not trying hard enough to excel. (IANS)