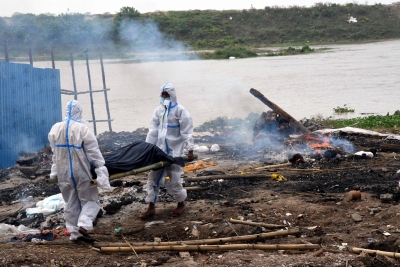 Bengaluru– In the wake of the increasing body count at the crematoriums in Bengaluru due to the raging second wave of the Covid-19 pandemic, crematorium staff have sent out a loud and clear message that they would not be able to handle more bodies.

A staff at the Medi Agrahara Crematorium in Yelahanka told IANS on condition of anonymity that all the workers were tired, as they had been working almost 18 to 20 hours a day for the last two days and they are not able to discharge their duties any further.

“We are tired of seeing so many bodies piled up outside the crematorium. By the time we burn one or two bodies, four more are in the queue. It is a horrific scene by any yardstick. We are one among the seven crematoriums in the Bengaluru Civic Body which is designated to handle Covid bodies. We have burnt at least 25 to 28 bodies each in the last two days. We have only two furnaces here,” he said.

He also said that if the same trend continues, that day is not far off when the media will come here to report about furnaces melting for being unable to handle the bodies.

Hearing these complaints and after the Bengaluru city legislators suggested to the Karnataka government to temporarily allocate vacant land to cremate Covid bodies, the revenue department of the state had decided to allocate cattle grazing land across the city for cremating bodies using wood.

Revenue minister R. Ashoka told reporters that the department is in the process of identifying cattle grazing land which can be converted into temporary cremation grounds.

“Even to set up a temporary cremation ground, we need to provide basic infrastructure like borewell, electric points, water facility etc. At least this much is needed. It is not just a matter of allocating land alone,” he explained.

Karnataka remains one the worst Covid-hit states in the country, reporting 21,794 fresh cases and 149 deaths on Tuesday. However, its mortality rate is still lower compared to few other states. (IANS)