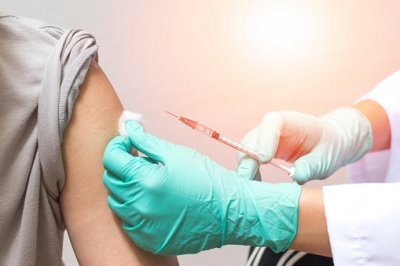 New York– A new personalised cancer vaccine, developed by the US researchers, is safe and beneficial for patients with different cancers, including lung and bladder, results of phase I clinical trials have shown.

“While immunotherapy has revolutionised the treatment of cancer, the vast majority of patients do not experience a significant clinical response with such treatments,” said Thomas Marron, Assistant Professor of Medicine (Hematology and Medical Oncology) at the Icahn School of Medicine at Mount Sinai, in New York, US.A

“Cancer vaccines, which typically combine tumour-specific targets that the immune system can learn to recognise and attack to prevent recurrence of cancer. The vaccine also contains an adjuvant that primes the immune system to maximise the efficacy,” Maron said.

In the phase 1 trial, 13 patients received the vaccine: 10 had solid tumour diagnoses and three had multiple myeloma, before the vaccine.

The team sequenced all the 13 patient’s tumour and germline DNA and tumour RNA and administered them 10 doses of the personalised vaccine over a six-month period.A

The vaccine was given with the immunostimulant, or adjuvant, poly-ICLC, which is “a synthetic, stabilised, double-stranded RNA capable of activating multiple innate immune receptors, making it the optimal adjuvant for inducing immune responses against tumour neoantigens,” said Nina Bhardwaj, Director of the Immunotherapy Programme and at The Tisch Cancer Institute at Mount Sinai.

After a follow-up of nearly two-and a half years, four patients still had no evidence of cancer, four were receiving subsequent lines of therapy, four had died, and one chose not to continue the trial.

The results were presented at the virtual American Association for Cancer Research (AACR) Annual Meeting 2021 held between April 10 and 15. (IANS)