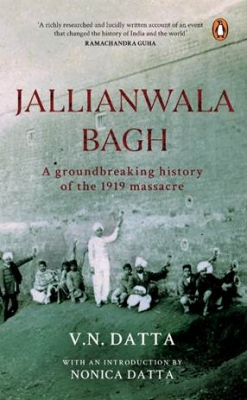 New Delhi– The Jallianwala Bagh massacre propelled Mahatma Gandhi to assume centre stage and encouraged him to launch his non-violent movement, says Nonica Datta, an Associate Professor of History at JNU in a new introduction to her late father V.N. Datta’s book, “Jallianwala Bagh – a groundbreaking history of the 1919 massacre” that was published on its 50 anniversary in 1969 and has been updated on the 102nd anniversary, April 13, of the horrific slaughter in which, according to the author’s research, over 700 unarmed civilians were killed.

“It’s critical to remember the legacy of Jallianwala Bagh. V.N. Datta argues, ‘Jallianwala Bagh changed the idiom of Indian nationalism’. It propelled the Mahatma to assume centre stage. The violence of Jallianwala Bagh encouraged him to launch his non-violent movement; 1919 forged the enduring bond between Gandhi and Nehru. Here began modern India’s most critical and longest political partnerships that continue to profoundly influence contemporary Indian politics,” Nonica Datta told IANS in an interview.

“Ironically, Punjab’s leaders were sidelined. For example, Saifuddin Kitchlew is forgotten. Secondly, there wouldn’t have been any Bhagat Singh or Udham Singh, had there been no Jallianwala Bagh. And nor the Chittagong Armoury raid of 1930. The massacre led to a revolution in India, a revolution that made India free. This fact has been systematically erased by the dominant narrative of the nationalist struggle. V.N. Datta’s classic recovers the crucial turning point which changed the course of India’s freedom movement,” Datta added.

She also points to the role of a Congress “agent provocateur” that her father had unveiled.

“He addressed the silences that besiege the history of the tragedy. Here playing detective, Datta argued, for instance, that to understand the carnage, it is necessary to follow the movements of Hans Raj, the chief organiser of the Jallianwala Bagh meeting. A member of the Congress party, Hans Raj was the right-hand man of the Congress stalwart, Saifuddin Kitchlew. At the time of the meeting, he urged the crowd to be seated and declared ‘the Government will never fire’. After a while, he waved his handkerchief and Dyer and his Indian troops appeared. When the shooting began, Hans Raj had already left.

“He was an agent provocateur, V.N. Datta reveals, and later became a government approver. Thus, V.N. Datta regards the Jallianwala massacre as a conspiracy that was planned by the British in which Hans Raj played a crucial role. The Congress carefully covered up Hans Raj’s culpability; Gandhi, in particular, remained conspicuously silent about Hans Raj’s major part in the crime. In contrast to Datta’s work, the history of the freedom movement in India, dominated as it is by the Congress narrative, has systematically erased this criminal reality.

“V.N. Datta has ensured that such whitewashing does not succeed in any objective and critical analysis. Eventually what happened to Hans Raj, Datta was intrigued by this question. His scouring of the records suggests that Hans Raj was ‘spirited away to Mesopotamia by the British.’ Of course, the people of Amritsar, knowing of his complicity, burnt his house down,” Nonica Datta said.

“For the 102nd anniversary of the massacre,” she said, “It is relevant to bring a new edition for the younger generation which remains unaware of this horrific chapter. This pioneering classic deserves a wider readership, so I decided to write an Introduction for the present edition. I spent a long time in Amritsar recording memories which are still powerful. This book also includes my interview with my father where he shares his candid journey. For me, it was exciting to engage with a classical but radical polymath historian’s work via my method of memory.”

Born in 1926, V.N. Datta’s house was close to Jallianwala Bagh, and he had grown up with his older sister Shanti telling him about April 13, when General Dyer ordered his Indian troops to fire into the crowd. “Datta set the record straight about the number of killings in his correspondence with the Duke of Edinburgh which is housed at the Centre of South Asian Studies, University of Cambridge,” Nonica Datta said.

V.N. Datta’s visits to Jallianwala Bagh as a young boy, where the gunshots were all too freshly visible, his rootedness in the city of Amritsar, and his training as a professional historian, “all this shaped the writing of this book. This history is the outcome of Datta’s visceral engagement with the haunting memory of the massacre and the alternative versions that he culled from different archival sources. This is a personal book but it is grounded in solid historical research,” Nonica Datta explained.

She also regretted that not enough is being done to commemorate the Jallianwala Bagh Massacre.

“Jallianwala Bagh is now more like a picnic spot for tourists. We don’t even have the full list of the names of those who died. Jallianwala Bagh is just a date in the nationalist and official agenda. The prevailing sentiment in Punjab is one of betrayal caused by state neglect.

“Jallianwala Bagh is a bleeding wound for the Punjabis, who feel that Britain has to come forward and accept its culpability. That never happened. Indeed, this guilty avoidance of the truth raises the hyper-sensitive question of the UK taking responsibility for its own imperial past and violence, which would facilitate healing and restitution. It opens the larger question of how colonial empires engage with their former colonies and undo their criminal acts of violence, be it Africa, Asia or Latin America. In the current global context, it’s time to be free from military and racial violence. Jallianwala Bagh provides this uncomfortable lesson, as V.N. Datta tells us,” Nonica Datta concluded.(IANS)