“I am immensely grateful to my family of 50 million for their constant love and support. Everything I am is because of them. I pray for their safety and well-being in these trying times. I hope they all, their families, friends and in fact everyone in the world comes out of this soon,” Jacqueline said.

The Bollywood star has her kitty full with films over the next few months. She co-stars with Akshay Kumar in “Ram Setu” and “Bachchan Pandey”, and returns with Salman Khan in “Kick 2”. “Cirkus” casts her with Ranveer Singh while Jacqueline also features in the horror comedy “Bhoot Police”, with Saif Ali Khan, Arjun Kapoor, and Yami Gautam.

Bhumika Gurung: I find it exciting to work under pressure

Mumbai– Actress Bhumika Gurung, who plays the role of Meera in “Mann Ki Awaaz Pratigyaa 2”, is not one to crumble under pressure. The actress says while acting, she never really is stressed by who she is sharing the screen with or how her character will be received by the audience.

“I’m not thinking about anything but the show when I am acting. I’m a confident person, I find it exciting to work under pressure. Honestly, it’s a task to make each character convincing but that’s my job. I’m adding my touches to Meera’s role but mostly I am going by the script because the character has been written very well on paper,” she told IANS.

Bhumika says she is happy to get roles that are close to how she is in real life.

“I feel lucky to be offered characters that share similarities to who I am in real life. Meera is someone who believes in doing good for others. This is one trait that I also have,” she says.

On the current scenario in the country, the actress says she is trying to do as much as she can to help others.

“It has impacted everybody’s life. I’m grateful to be in a better position than many who are suffering out there. I’m doing my best to help those in need and praying for everyone’s safety. I take this as a phase that hopefully would pass soon,” she says.

Mumbai– Actor Sonu Sood, who was a guest at the recent episode of the reality show “Dance Deewane”, offered to provide food for the entire village of one of the contestants.

Contestant Uday Singh, a daily wage earner from a small settlement in Neemuch, shared how everyone in his village is struggling to make ends meet during the current lockdown situation.

The actor immediately told Uday that he would provide food for the entire village till lockdown is lifted and things come back to normal.

He said: “Uday, I want to tell the people in your village that the lockdown, whether it lasts for one month or two months or even six months, I will ensure that your entire village will keep getting rations. Tell them not to take tension, no one will go hungry there, no matter how long the lockdown continues.”

The actor has been helping people cope with the ongoing Covid crises in the country. From arranging for beds to oxygen cylinders and life-saving injections, Sonu has been trying to reach out to as many people as he can.

Last year, too, Sonu had actively worked to help migrants reach home and also provided e-rickshaws for the unemployed.

Mumbai– On the occasion of International Dance Day on Thursday, actress Neha Marda opened up on her passion for dancing, saying it helped her get to where she is today in her career.

“Dance is not just a small part of my life, it is literally my life. I believe I wouldn’t have been where I am today if it weren’t for my passion and love for dance. There is a different level of happiness and power that I have achieved by pursuing dance,” says Neha.

“I realised the true meaning of it when I started dancing at the age of three. I have trained myself for nine years in Bharatanatyam, seven years in Kathak and four years in Jazz and Salsa. As a kid, I participated in dance reality shows and even judged one of them, so my dance journey began from there and it is still going on,” she adds.

As a child, she learnt to express her feelings because of dance. “Honestly, I believe dance has made me very expressive because as a kid, I was very shy and only after I started dancing, I learned how to express myself in a better way. One dance style that I look forward to learning next is Bachata because I think it needs a lot of power and a lot of strength,” says Neha, who plays Shubhra in the Zee TV show “Kyun Rishton Mein Katti Batti”.

Mumbai– Actress Kareena Kapoor Khan on Thursday posted a clip from the “Tom & Jerry” cartoon series in a bid to explain to her son Taimur why it is essential for adults to get vaccinated for Covid-19. 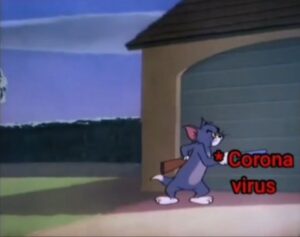 Kareena wrote a note with the video post, too, about how she has been trying to explain the concept of vaccination to Taimur.

“We don’t realise that our kids are also absorbing what’s going on and they are scared too. We were talking to Tim to try and explain why all the adults need to be vaccinated and I think this sums it up pretty well. It’s really that simple. But like we explain to our kids, we too need to be patient and help everyone who is trying to help us — medics, pharma, authorities and the millions of volunteers — please register and wait for your turn. #BreakTheChain,” she wrote.

The actress has been posting messages on social media, urging people to follow Covid protocols seriously. She posted a message talking about the importance of wearing masks correctly recently.

Priyanka Chopra Jonas: No one is safe unless everyone is safe

Mumbai– Priyanka Chopra Jonas has set up a fundraiser to help India amid the ongoing Covid-19 crisis. In an Instagram video she posted on Thursday, she talks how it is important for everyone to come forward and help the country.

“India, my home, is suffering the world’s worst Covid crisis, and we all need to help! People are dying in record numbers. There is illness everywhere, and it’s only continuing to spread and kill at great speed and scale,” she wrote alongside the clip.

She added: “I have set up a fundraiser with GiveIndia, the largest organization on the ground in India providing Covid relief. Whatever you can spare, truly makes a difference. Nearly 63 million people follow me on here, if even 100,000 of you donate $10, that’s $1 Million, and that’s huge.

She shared that no one is safe unless everyone is safe.

Mumbai– Sunny Leone has urged everyone to fight Covid-19, saying it is time to get vaccinated.

Sunny posted a picture on Instagram where she is seen a blue lace leotard paired with a tan jacket, smiling at the camera.

“Let’s take the fight to #covid_19. It’s time to get Vaccinated!! Vaccinate yourself and your loved ones to give everyone especially the Frontline warriors a fighting chance against the pandemic!!” Sunny wrote alongside the image.

Sunny is currently in Kerala to shoot her upcoming film, the psychological thriller “Shero”. It is directed by Sreejith Vijayan and will be released in Tamil, Hindi, Telugu and Malayalam.

She had recently shot for the reality TV show “MTV Splitsvilla” in the state.

Ileana D’Cruz: Getting into uncertain sphere pushes me to do better

Mumbai– Actress Ileana DCruz says almost all her roles made her wonder how she would pull it off, and that is what pushes her forward.

“I think in most films that I have done I constantly question how I will do it, and that is what pushes me forward because I think if I walked into a film completely cocky and confident, I wouldn’t be really able to do justice in a way,” Ileana told IANS.

Ileana, who was recently seen in the digitally released film “The Big Bull” says she likes uncertainty.

“I like the uncertainty, not really knowing how I am going to do it. I like getting into a sphere that is uncertain. It sounds really strange but it pushes me to do better and work harder,” she said.

Ileana will next be seen in “Unfair N Lovely”, a comic take on India’s obsession with fair skin. The film is set against the backdrop of Haryana, and casts Ileana opposite Randeep Hooda. (IANS)