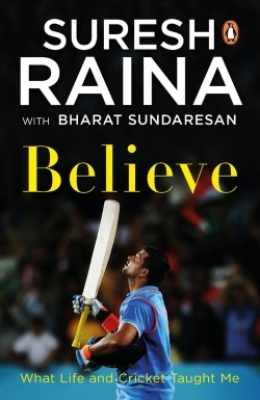 New Delhi– Sachin Tendulkar gave him a mantra that he took to heart, getting it etched on his arm as a tattoo.

In “Believe — What Life and Cricket Taught Me” (Penguin), co-authored by Bharat Sundaresan, Suresh Raina, one of India’s most successful international cricketers, an aggressive left-handed middle-order batsman and an occasional off-spin bowler who is regarded as one of the best fielders in the world, takes you through the challenges he faced as a young cricketer.

He was bullied in school and at cricket camps, but he always punched above his weight, overcoming every adversity life threw at him and never gave up. This is the story of the lessons he learnt and the friendships he built.

Peppered with invaluable insights — about the game and about life that Raina acquired from senior colleagues such as Rahul Dravid, Anil Kumble, Sachin Tendulkar and Sourav Ganguly, among others — this book will make you believe in the power of hard work, love, luck, hope and camaraderie.

It takes us through the highs and lows of the cricketing career of a man who saw his world fall apart and yet became one of the most influential white-ball cricketers India has ever seen, a youth icon and the fifth most followed sportsperson on social media with 40 million followers.

Bharat Sundaresan is a world-renowned, award-winning cricket writer currently based in Adelaide. He is the Australian correspondent and senior writer for Cricbuzz. He is also the bestselling author of “The Dhoni Touch.” (IANS)