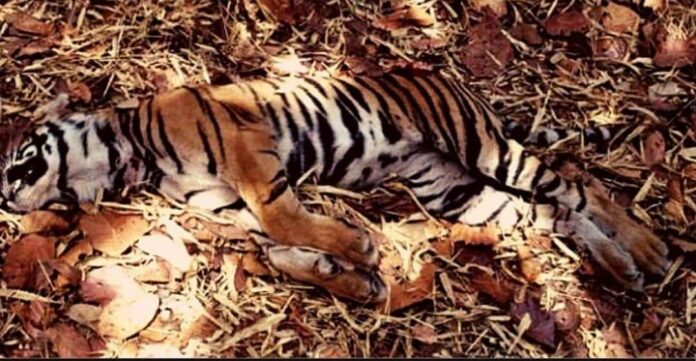 The incident, which happened last Sunday, came to light a day later when the mutilated carcass was found in a pool of blood with the poachers having chopped off its front paws to extract the claws.

The wildlife community and officials have reacted strongly to the incident which occurred within the Mukutban ranges of the thick forests, known to be frequented by tigers in the Vidarbha region.

Member of State Board for Wildlife and Satpuda Foundation founder Kishore Rithe exposed the matter in public and demanded stringent action against the culprit-poachers responsible for the “murder”.

He termed it as one of the most horrible instances of a tigress’ death which has never been heard or witnessed in recent years.

A team of veterinarians comprising Dr. Chetan Patond from Pench Tiger Project, Dr Arun Jadhav from Wani, Dr S.S. Chavan of Zari, Dr D.G. Jadhav of Mukutban and Dr V.C. Jagde performed the autopsy on the tigress and the report is awaited.

As per preliminary investigations by forest officials, the tigress in advanced stage of pregnancy was using an underground den with a small opening for rest and safety.

Apparently, the stalking poachers may have espied her entering the den and they blocked its small opening with sticks and stones before setting it afire to suffocate and immobilise the tigress.

“To ensure her death, they had pierced her body with sharp bamboo sticks or metal rods as she struggled inside the den, causing severe injuries. Later, they dragged out her body and chopped off her paws,” said Rithe.

The forest officials have recovered bamboo sticks, clutch wires and other evidence and also it came to light that she was just a month due before delivery.

“The only similar incident I recall in over 30 years in wildlife was when a tigress was electrocuted in 2004 in Melghat which led to the abortion of her three cubs due to the massive electric shocks. The latest incident is even more barbaric,” Rithe said.

Conservationist Varad Giri said that the country is losing its pride of an animal by such heart-wrenching incidents and demanded strict action against the poachers.