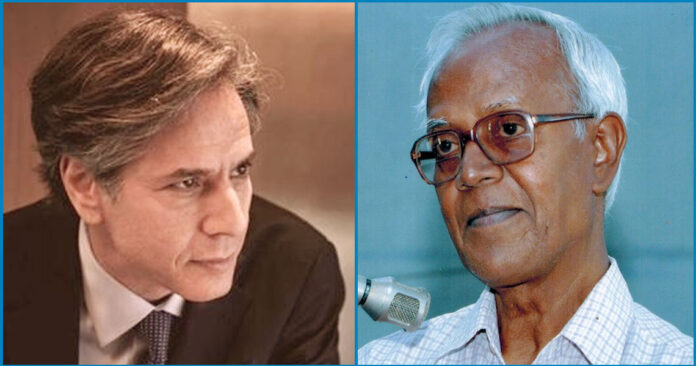 New York–US Secretary of State Antony Blinken has said that he would look into the case of an 83-year-old Catholic priest, Stan Swamy, held in India on allegations he was linked to Maoists.

Responding on Wednesday to a request from a member of the House of Representatives while he was testifying before the House Foreign Affairs Committee, Blinken asked for more information and said: “We’ll look into it.”

Juan Vargas, who is the vice chair of the House International Economic Policy and Migration Subcommittee, told Blinken while questioning him that it was “incredible injustice” that Swamy, who was arrested by the National Investigation Agency, has been in jail for over 130 days.

Swamy belongs to the Jesuit order of priests and Vargas said that he had himself been a member of that society.

He was arrested in Ranchi and taken to Maharashtra and detained in a Pune jail under the Unlawful Activities Prevention Act (UAPA) on allegations that he participated in the activities of the banned Communist Party of India-Maoist.

The case relates to a celebration by Dalits on January 1, 2018, in Koregaon-Bhima near Pune, which was followed by violence that left one person dead.

Swamy has been an activist for tribal and Dalit rights.

Earlier in his testimony to the Committee on President Joe Biden’s Priorities for US Foreign Policy, Blinken said that in furtherance of its aims, “we held the first ministerial meeting of the Quadrilateral Security Dialogue between us, Japan, Australia, and India, and we will hold a leader-level summit this week on Friday”.

China was the dominant theme during the hearing with Blinken declaring, “Our relationship with China, the biggest geopolitical test of the 21st century”.

Repeatedly questioned about Biden’s comment when asked on a CNN programme about Beijing treatment of the Uighur Muslim minority that “culturally, there are different norms that each country and their leaders are expected to follow”, Blinken reiterated that he considers there was a “genocide” of the Uighurs and the US would continue to speak out forcefully against it. (IANS)

India cooperated with US troop withdrawal, evacuation from Af: US spokesperson

India cooperated with US troop withdrawal, evacuation from Afghanistan: US spokesperson