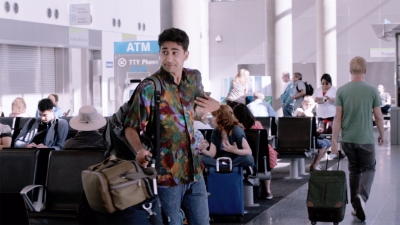 You’d think you have seen this before. A young boy from middle-class India lands in the United States chasing a dream, and his struggle for sustenance becomes portrait of the grind that almost every immigrant must endure.

If Danish Renzu’s film is outstanding despite the note of familiarity, it is because of the sheer authenticity with which the writer-director tells his tale. The film is unflinching in tone, yet sensitive enough while dissecting the reality it presents. Renzu uses his crisp runtime of 86 minutes well, to set up nuanced storytelling.

Unlike most films pertaining to the subject, “The Illegal” is not about immigrants who enter the US unlawfully. It is about people who come in with legitimate papers, yet are forced by circumstances to survive as if their presence is illegal.

“Life Of Pi” actor Suraj Sharma plays Hassan Ahmed, who is one such character. Hassan’s passion for filmmaking is destined to take him from Purani Dilli to Los Angeles. He gets admission at film school in the US, so his father (Adil Hussain) takes a loan to fund his dream.

Renzu sets an endearing picture of the family in the opening minutes, as Hassan records a few parting words from his father, mother (Neelima Azim) and sister Mahi (Shweta Tripathi). He needs such a clip, he tells them, as a pep pill for the days when he might be “ready to give up”. It is a fine sequence, deftly executed, rendering a personal touch to the way the protagonist is imagined. The screenplay sustains that whiff of intimacy as it follows Hassan to America.

Before entering films, Renzu spent time in the US studying electrical engineering at UCLA, and he also holds a UCLA Writers’ Program certification in screenwriting. Thematically, he would have drawn from real instances that he may have encountered during that stint as a student. It would have let him create Hassan with greater assuredness.

Hassan’s existence in the US becomes a picture of irony. On the one hand, he is doing well in film school. Yet, there is trouble back home financially, owing to a down turn in his father’s health. His plans to stay at his maternal uncle’s home in the US come to nought, and Hassan must take up the job of a waiter.

Renzu uses Hassan’s dual life well, to portray two sides of an immigrant’s existence in the US. On one hand, he is impressively learning his ropes in the world of American cinema, which has lately conversed with great relish about inclusivity. Yet, moonlighting at an Indian restaurant as a waiter throws up a dreary, diametrically opposite picture of exploitation. The essence of the film lies in that dichotomy.

It is Suraj Sharma’s film all through, and the actor does impressively to bring alive Hassan, although you would spot a few winning performances among the prop cast, too. Iqbal Theba leaves an impact as the restaurant supervisor fondly called Babaji by his colleagues. Adil Hussain, Shweta Tripathi and Neelima Azim actually get minimal footage, but leave a mark.

“The Illegal” is well-scripted, executed and acted out. It is a small film that scores big. (IANS)