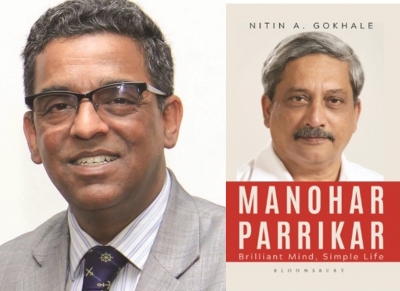 New Delhi– Manohar Parrikar transformed the Ministry of Defence (MoD) from a “slumberous, mammoth and slow-moving organisation, happy to trudge along, least bothered about time-bound outcomes” and “personally led changes that have resulted in transparent and simpler” acquisition procedures” and implemented “three big decisions”, says a new book on his 28-month tenure in the South Block by his “very close” friend Nitin Gokhale and commissioned by the Goa government that he also headed for four terms as Chief Minister over an eight-year period.

His stint in New Delhi “will forever remain etched in memory, not just because we became very close friends during that period but also because of the changes he sought to bring in the functioning of the largely opaque Ministry of Defence.

“He not only grasped the intricacies and complexities of the important ministry but also put his own stamp on the day-to-day functioning in the South Block,” Gokhale, a media entrepreneur, strategic affairs analyst and author of more than half-a-dozen books on military history, insurgencies and wars, writes in “Manohar Parrikar — Brilliant Mind, Simple Life” (Bloomsbury).

(Parrikar had proposed Narendra Modi’s name as the BJP’s Prime Ministerial candidate at a party convention in Goa ahead of the 2014 General Election.)

Traditionally, Gokhale writes, the MoD “has been a slumberous, mammoth and slow-moving organisation, happy to trudge along, least bothered about time-bound outcomes. It had gotten used to a culture of -no decision’ or -slow decision’, thanks to the over-cautious and risk-averse A.K. Antony — ironically, India’s longest-serving Defence Minister — who made it a point to take bare minimum decisions during his tenure (2007-14), lest any blame of corruption came onto him”.

“In contrast, Parrikar took and implemented three big decisions that stand out in his short stint as India’s Defence Minister” that Gokhale lists as “solving the complicated One Rank One Pension (OROP) issue 45 years after it had been first raised”, and “to go for off-the-shelf purchase of Rafale fighter jets and convincing the Indian Air Force (IAF) to start accepting the indigenously-made Light Combat Aircraft (LCA) Tejas for induction”. His “third and most popular decision was to order in 2016 the surgical strike in the immediate aftermath of the Uri attack in which 18 soldiers of the Indian Army were killed in action”. Gokhale writes.

Defence reforms in India “have been a continuous process since 2015 (soon after Parrikar assumed office); they have been speeded up in the past five years or so. The improved transparency and increased interaction between end users and the industry has brought about a change no one thought was possible until recently. The new-found openness in the Indian Ministry of Defence is reflected in the number of increased interactions between the armed forces, academia, industry and industry associations like CII, FICCI and ASSOCHAM”, Gokhale writes.

While the Rafale deal “was the biggest of the complicated cases that the MoD resolved, there were other crucial pieces of equipment that India needed, and needed as soon as possible. So all the hurdles in purchases of artillery guns (M-777 Howitzers from the US), attack and medium lift helicopters for the Army (Chinook and Apache helicopters from the US), frigates and mine counter-measure vessels for the Navy, and Akash missiles for the Air Force were removed in double quick time”, Gokhale points out.

There could, however, be a long-term fallout of the Rafale deal.

It had been chosen as the winner of a six-jet completion for an IAF tender for 126 medium multi-role combat aircraft (MMRCA) after a torturous effort that began in 2007. Of these, 18 were to be purchased in a fly-away condition and the remaining were to be manufactured in India by Hindustan Aeronautics Limited (HAL) under a transfer of technology (ToT) agreement with Dassault Aviation.

Dassault maintained that 31 million man hours would be sufficient to produce 108 aircraft in India, HAL was asking for a mark-up by 2.7 times. The MoD contended this would violate the terms of the lowest bid on the basis of which the aircraft had been selected.

There was also the question of the “matrix of responsibility”. India said this lay with Dassault, which was flatly turned down.

With the negotiations thus stalled, the book says Parrikar recommended that the tender for 126 aircraft be scrapped and India purchase 36 Rafale’s to meet the IAF’s minimum requirements. This Prime Minister Narendra Modi announced on April 10, 2015 during a state visit to France at a joint press conference with then President Francois Hollande — an announcement that caught everyone in India by surprise.

“Alerted by a source about the possibility of India scrapping the original tender and going in for off-the-shelf purchase of Rafale jets, I scooped the story on my blog News Warrior (www.nitinagokhale.blogspot.in), 10 minutes before midnight on 9 April, almost 22 hours before Modi’s announcement of India deciding to buy Rafale jets off-the-shelf was made in Paris. I, however, got the numbers wrong. My report said India would buy 63 Rafale directly from Dassault Aviation,” Gokhale writes.

As for the Tejas Light Combat Aircraft (LCA), the cabinet on January 13 approved the procurement of 83 planes by the IAF — 73 Mk-1A fighters and 10 Mk-1 trainers from HAL) at a cost of Rs. 45,696 crore, India’s largest defence deal so far. The formal order was placed at the inauguration of the Aero India 2021 expo on February 3.

Simple arithmetic will tell you that 83 LCAs plus 36 Rafales makes up for 119 aircraft, close to the IAF’s original projected requirement of 126 jets. This means that while a fresh tender has been floated for upwards of 100 MMRCAs, this is likely to die a natural death, given that HAL is in the process of developing an Advanced Medium Combat Aircraft (AMCA) — though it is anybody’s guess when the prototype will fly, given that the Tejas LCA was conceived in 1983, first flew in 2001, received its Initial Operational Clearance in 2013, was inducted in the Indian Air Force (IAF) in 2016.

As for the surgical strikes, Gokhale writes that Parrikar had rushed to Srinagar and Uri straight from Goa (he had gone home for the weekend), and his “first question to the Army leadership was: How can we send a strong message to Pakistan and extract revenge for the sacrifice of our soldiers? When the commanders said there were options to cross the Line of Control (LoC) but that in the past, Delhi had been reluctant to give approval for such an action lest Pakistan retaliated and matters escalated, Parrikar instantly ordered the commanders to prepare a plan and rushed back to Delhi to present the option to Prime Minister Modi and other top functionaries of the government”.

The book also quotes Lt Gen. Satish Dua, then the 15 Corps Commander in Srinagar, as saying: “My first meeting with Manohar Parrikar happened at a very ill-fated moment. When the terrorist attack on the Uri camp was reported, he flew from Goa to Srinagar via Delhi. I received him. Taking details from me about the incident, he asked two questions. The first one was related to an operational issue, so I won’t divulge it here but the second point he made was about a likely operation across the Line of Control. He gave an instant go ahead but told us to make sure we don’t suffer a single casualty. Encouraged by his vote of confidence, we made a plan and eventually succeeded in carrying out the task assigned to us.”

Within 10 days of the Uri attack, Indian Special Forces had hit at least six targets inside Pakistan-occupied Jammu and Kashmir (PoJK), destroyed many terrorist camps and Pakistani Army posts, killing at least 65-70 terrorists and Pakistani Army personnel, “thanks to the decisive political decision taken by Parrikar and fully backed by Prime Minister Modi and the National Security Adviser (NSA) Ajit Doval”.

“Uri became a by-word for India’s new-found confidence and ‘How’s the josh’ became a popular slogan, thanks to the movie Uri that was later made on the event,” Gokhale writes.

In all this, despite the deep interest Parrikar took in the MoD’s functioning, “his heart was not fully in Delhi. His first love was Goa. So, he continued to run the state from Delhi. The enormous workload eventually took its toll on his health. He was a loner in the manipulative and transactional world of Delhi”, Gokhale writes.

Parrikar resigned on March 13, 2017 and was sworn in the day for a fourth term as Goa’s Chief Minister. He died on March 17, 2019, succumbing to pancreatic cancer.(IANS)