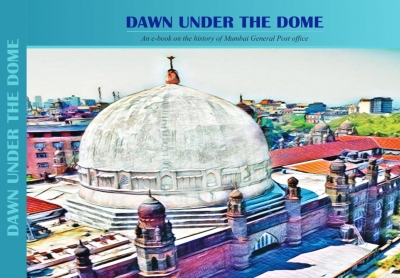 Mumbai– Like many of the magnificent British-era buildings, the iconic General Post Office of Mumbai is a riot of turrets, big and small spires, minarets, big and small windows which allow light and air inside, topped off by a majestic dome looking at the early-summer clear blue skies.

Standing on a tri-junction behind its famed cousins of the same era — the Chhatrapati Shivaji Maharaj Terminus (CSMT) and the BrihanMumbai Municipal Corporation (BMC) — the 108-year-old, GPO Building is unique and exclusive on various counts.

Now, the history of the imposing building has come alive in an e-book — “Dawn Under The Dome” — released this week by Maharashtra Governor Bhagat Singh Koshyari.

A paradigm of Indo-Saracenic architecture, (blend of Persian-Hindu-Gothic), the GPO, with India’s second largest dome of 65-feet diameter, was designed on the lines of the Gol Gumbaz of Bijapur (Karnataka) which has the country’s biggest dome of 125-feet diameter.

The huge construction which houses the biggest postal hub in Asia, and among the biggest in the world handles over 50,000 addresses per day besides offering other services, abuzz with visitors and staffers daily, in lush greenery, swaying palms and shady trees dotting the GPO campus.

The building, designed by a Scotsman, John Begg and his protege George Wittet, remains a marvel for modern architects for its interior designs, the striking exteriors, and the well-ventilated inner spaces which never evoke claustrophobic or cramped feelings anywhere.

Three different types of Indian stones were used to build the GPO – the Grey Kurla Basalt with buff trachyte, the Yellow Malad Stone and the White Stone from Dharandhra in Gujarat, with its subtly glistening quality.

“The GPO is a very important building of Mumbai It helps connect people and it is for the general public,” says Pandey, who helped bring out many unknown facets of the structure in the e-book.

“The GPO’s gleaming white external dome at the top has a diameter of 65 ft, almost half that of the Gol Gumbaz, which is the tomb of Mohammed Adil Shah,” said Pandey.

Though fully Indian in theme, design and material, Begg artistically stamped motifs of the Thistle (the National Flower of Scotland) and the Indian Lotus, in remarkable styles on all the walls.

The GPO has total 9 gates and at least 10 entrances, three basements considered a rarity even in modern buildings, 3 tunnels and a maze of staircases, besides 2 British era elevators.

The far-sighted Begg had interconnected the 3 basements and the 3 tunnels, which are modeled like dark caverns, with a wide hall, thick walls and muddy floors, with two known openings, one to the Mumbai Docks and the other to the Mint, both less than a kilometre away.

Historians believe that whenever there was danger from the Indian freedom-fighters aiming to plunder His/Her Majesty’s gold stored in the treasury, the British troops would simply scoot with it and hide in the tunnels, safeguard it in the Mint, or in worst cases, directly ship it to Britian through the sea-route via the Mumbai docks.

The 2 eye-catching iron-wood elevators were imported from Great Britain, with exquisite mirror works, fashionable windows and artistically designed grills, though the mechanism is now modernized to electric, but GPO is among the few in the city that has preserved its ancient elevators.

The GPO is also a regular with Bollywood with many films like “Lage Raho Munnabhai”, “Once Upon A Time In Mumbai”, “Daddy”, “Sarkaar”, “Big Bull”, and more shot inside/outside here, capturing aspects of its timeless beauty on celluloid.

Despite the Internet era, the GPO remains a busy-bee with staffers manning it 100 counters, including an Indian Railway reservation counter, an Aadhaar Card centre, a postal stationery shop, a postal ATM, and offering a host of other philately services since over a century. (IANS)