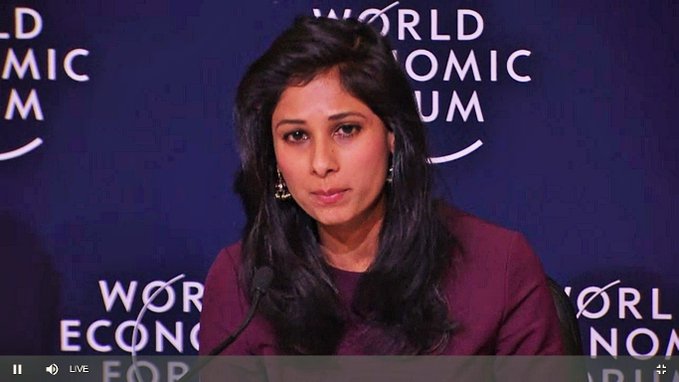 United Nations– As India recovers from the onslaught of the Covid-19 pandemic, its leadership in vaccine production and its growth projection of 11.5 per cent will have an important role in helping the world overcome the pandemic, Gita Gopinath, the chief economist of the International Monetary Fund (IMF), said on Monday.

India makes up about 7 per cent of world gross domestic product (GDP) based on purchasing power parity and “when you’re that large, what happens in India has implications for many other countries in the world, especially countries in the region”, Gopinath said during an interaction with the permanent representative of the UAE, Lana Zaki Nusseibeh, at the Hansa Mehta Memorial Dialogue.

“Because of its size, when you have it growing, it increases demand for goods from other parts of the world, and that’s a big positive,” she said.

While there were troubling signs of Covid cases going up, “we’re still looking at very low numbers” of Covid-19 infections and India is reopening and activities are coming back, leading to the IMF growth projection of 11.5 per cent for the next fiscal year after a negative growth of 8 per cent, she said.

India, which is the world’s vaccine hub, has “been playing a very important role in helping the world in this crisis through its vaccination policies”, she said.

The Serum Institute of India is the world’s largest vaccine producer and a lot of its Covid-19 vaccines are going to the COVAX programme of the World Health Organization to provide vaccines to developing countries, she said. The Indian government has also donated vaccines to neighbouring countries, she added.

“Everyone is looking to India to help lead out of this economic challenges that we’re facing this year and next,” Nusseibeh said.

The dialogue on the theme “Women’s Economic Empowerment and Inclusive Global Economic Growth: COVID-19 and Beyond” was organised by India’s Permanent Mission and UN Academic Impact on International Women’s Day.

The dialogue honours Hansa Mehta, the Indian freedom fighter and pioneer in the quest for women’s rights who was a member of the UN Human Rights Commission and one of the drafters of the Universal Declaration of Human Rights.

“This reminds us that altering just one word can make a very big difference,” she added.

Assistant Secretary-General Anita Bhatia listed the legal, political, economic and social progress made by women since the time of Mehta, but said that the status of women was lagging in many areas.

While Mehta would be astonished by the progress, she would also ask “what we are going to do” about the persisting areas of inequality, Bhatia said.

This would require “putting women at the centre of efforts to build back better, so that we build back equal, paying attention to the childcare burden that most women carry and making it a national policy, and not an individual issue”, Bhatia said.

In her keynote address, Gopinath said, “As an Indian woman, I am especially grateful for the opportunity to honour Hansabehn, on whose strong shoulders I and many others stand.”

She said that ensuring women’s equality is a “moral imperative”, “gender empowerment is critical for the economic wellbeing of both men and women, and for societies as a whole”.

“With female labour force participation falling in many countries during the pandemic, targeted policies such as hiring subsidies may be needed to swiftly bring about the reintegration of female workers’ into the labour force,” she suggested. (IANS)