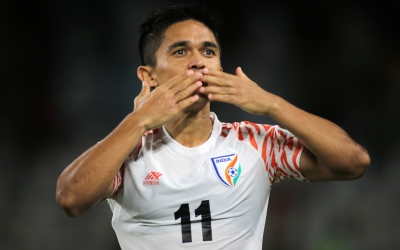 New Delhi– India football captain Sunil Chhetri hopes that the team will make the most out of the friendlies against Oman and the United Arab Emirates (UAE).

India return to international football after a gap of more than a year when they face UAE on March 25 in Dubai. They then play Oman on March 29. UAE and Oman are placed 74th and 81st respectively on the FIFA rankings, higher than India’s 104th.

“To lose out on international football for an entire year was such a big disappointment. But these are unprecedented times and they aren’t in our control. So, we have little to complain about. That said — I am both excited and grateful about the two friendlies which the Blue Tigers will play this month — and against some quality opposition which only betters the anticipation. Unfortunately, I won’t be able to be a part of it,” Chhetri told AIFF.com.

Chhetri is not part of the 27-man squad currently in the national camp in Dubai training for the matches as he tested positive for Covid-19.

He said that it is good that India are playing higher-ranked opposition. “I’ve always been saying that we need to better ourselves in Asia and that can happen only when we come up against top opponents.Oman and UAE most certainly fit that bill,” said Chhetri.

“When I first heard of the possible opponents, I was extremely excited even though it was just a possibility. I hope we, as a team, make the most of this chance, give a good account of ourselves and most importantly, learn from the experience,” he further said. (IANS)