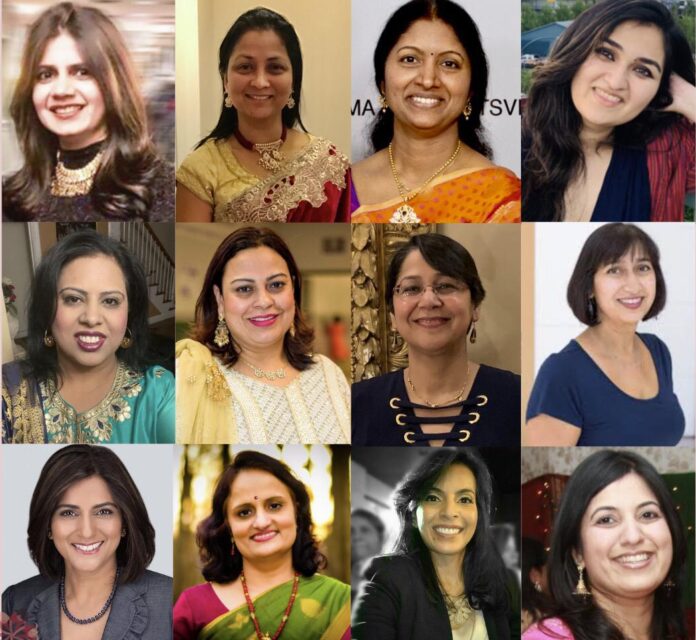 Every year March 8 is celebrated as International Women’s Day. There are hundreds of events all over the globe celebrating women’s social, economic, and political contributions as well as educational and thoughtful dialogues about the prevalence and persistence of gender inequality in the world.

The International Women’s Day event co-hosted by United India Association of New England (UIANE), Saheli, Women Who Win #Dreamcatchers and the Asian American Commission of Massachusetts, on March 6th was both a celebration of achievements of South Asian women and a discussion about the challenges that still remain for women to achieve gender equality.

This event was co-created and co-hosted by Aditi Soni, President of United India Association of New England, and Meena Bharath, Commissioner, Asian American Commission and Chair of DESE’s Gifted & Talented Education Advisory Council. The hosts appeared at the start of the event against a virtual backdrop of women holding hands with words ‘Decisive’, ‘Bold’, ‘Strong’, ‘Brilliant’, ‘Bossy’ and ‘Troublemaker’.

Aditi Soni opened the event with her rousing opening remarks, about her biggest inspiration in her life: her mother. Her mother, who was from a small town in India who raised six daughters, instilled in Aditi and her sisters a sense of independence and a desire to live life to the fullest. Aditi expressed that it was this inspiration that drives her to uplift other women and support them in their dreams. Meena Bharath, in her opening remarks spoke of the many role models and inspirations in her life from her mother, sister to Prime Minister Indira Gandhi to Vice President Kamala Harris. She expressed how in her ups and downs in life, especially as an immigrant in America, it is the sisterhood across the barriers of color, religion and beliefs that has supported her. With the hosts setting the mood, the event was off to a great start.

The event’s first session was led by Women Who Win #Dreamcatchers which is an award-winning global media platform for women dreamers (www.womenwhowin100.com) founded by Shaleen Sheth, Dr. Deepa Jhaveri and Dr. Manju Sheth. A panel of strong women leaders comprising Dr. Rollie Lal, Associate Professor at George Washington University, Dr. Anupama Gotimukula, Pediatric Anesthesiologist, and Samantha Ganglani, Vice President of Global Development at D-L Incentives, offered their perspectives on leadership. In the US where there are only 7% female CEOs and only 38% managerial positions are held by women, the panel unequivocally agreed that it was essential to have women’s voices at the table. Policy making around the world needs to reflect women’s priorities. Women also need to change their own perceptions of women being weak and need to become more proactive at seeking opportunities. The panel suggested that to be leaders, it is important to be fearless, to not hold back and show one’s passion and enthusiasm. However, being a women leader is not easy and the panel addressed the issue of conflict in leadership by talking how to understand and manage conflict of self, family, team and with external organizations.

The second session was on Unconscious Bias and Stereotypes led by Divya Chaturvedi, Co-Executive Director of Saheli, and Saheli Board members Shweta Agrawal and Tanu Dabasri. Saheli is a nonprofit based in Burlington providing free and confidential services to South Asian and Arab survivors of domestic violence. Unconscious gender bias remains a significant barrier to women’s career advancement. Understanding the cultural stereotypes that give rise to unconscious bias can help build an understanding of the constraints that women face in the workplace and what needs to be done to mitigate and overcome gender bias. It is unfortunate that 42% women still face gender discrimination at work while mothers face a significant barrier in getting jobs. Being a mother makes a woman 79% more likely to be denied a job or be offered less salary for the job. Shweta and Tanu shared their experiences with gender bias in the workplace and how they overcame these biases.

The Honorable Massachusetts Senate President, Karen E. Spilka, in her keynote address, spoke of her inspiration, Elizabeth Freeman, also known as ‘Mum Bett’, of her fight for justice. The Senate President shared that Mum Bett’s portrait along with 95 other women of color is part of an exhibit, HerStory, at her Office, to which she extended an invitation to all. She expressed her struggles as a woman, her experiences resonating with the previous speakers, especially when ideas of women go unacknowledged in Board Rooms or at decision making tables. She asked women to stay active in their work, to speak up, and that their contributions matter on the long road to empowerment. She shared that she has been working with her colleagues at the State Level and also Federal level on Pay Equity, Family Medical Leave, Affordable Childcare, and an initiative to Reimagine Massachusetts post pandemic. She expressed that none of these initiatives which impact women, and also everyone, would have happened had it not been for women who spoke up and fought for change. Her words enthused the audience with much energy and several attendees commented in the chat window of how inspirational her words were.

The third session on ‘Personal Branding’ was led by Roopal Patel, Vice President at Parexel International and Leadership & Executive Coach where she explored Personal Brand – what it is, why does it matter, how to assess and tips of changing the story so the world understands it. According to Roopal personal brand is determined by how you see yourself and how others see you. It sounds simple but perceptions are shaped by unconscious bias, gender stereotypes, society, and personal experiences. Understanding of self and projection of the qualities that feel authentic to you are important. Some tips to build your brand are being consciously visible, networking and connecting, auditing online presence and being consistent and authentic in projecting and leveraging your own unique personal brand.

The fourth session of the event was a much-needed discussion on women and mental health by Dr. Malini Prabhu, Psychiatrist at Newton Wellesley Hospital, and vice-president of UIANE She spoke about ‘Emotional First Aid’. Although we have bandages for cuts, hot soup for colds, and ice packs for bruises, most of us have no idea how to treat day-to-day emotional injuries such as failure, bullying, rejection, inequality, guilt, and loss. In sharing her own personal story of loss Dr. Prabhu brought to light the psychological stressors of grief and how she personally coped with her feelings by finding a meaning in loss by embracing running. Dr. Prabhu talked about taking care of one’s mental and psychological needs as ‘emotional hygiene’. Emotional hygiene is being mindful of one’s psychological health and adopt small brief but daily habits to monitor and address psychological wounds when we sustain them. Dr. Prabhu’s ‘emotional first aid kit’ includes paying to and recognizing emotional pain; replacing negative thoughts with positive distractions; monitoring and protecting self-esteem; finding meaning in loss; and managing stress with better sleep, exercise and biofeedback. Most importantly, it is important to seek professional help if one cannot get any reprieve from emotional injuries.

The last session of the event discussed men as allies in the fight for gender equality. This session was led by Pratima Penumarthy, Founder and Director of Arya Math Academy, and Shova Sharma, Financial Service Professional at New York Life and Board Member of Sewa International. This segment was moderated by Ashwini Salvi, President of Ashland Indians, who asked some probing and interesting questions. The speakers spoke about the supportive roles their fathers, mentors, colleagues, and spouses had played in instilling in them values of leadership and service. Pratima shared that her father’s words of ‘if you don’t have big goals and dreams you will end up working for someone who does’ inspired her to seek her own path in business. She spoke about the importance of networking with both men and women and why men and women working together is good for business networking and community in general. Business success is all about connections, relationships, and networks! Gender significantly moderates the relationship between people’s perceptions of information sharing and their intention to share information. They both shared their community work through Team Aid and Sewa International and the support they received from both men and women in their work. Shova spoke about the importance of

financial literacy and how every woman must ensure that she actively learns and participates in her family’s financial decisions. Moderator Ashwini had a surprise planned with a message from Ramakrishna Penumarthy (President, TAGB), the sole man speaker at the event, who encouraged men not to fall into trappings of gender stereotypes, to take up tasks as they come up, and empower women in living their dreams.

At the culmination of the two-hour event, Aditi thanked all the panelists and speakers for their participation and tips to create an enriching program. She encouraged women as well as men to watch out for unconscious bias and help create an inclusive world. She acknowledged support from men in her family, as she balances her job and community work. Aditi reminded everyone to get vaccinated when possible, so it is safe to celebrate future events in person. UIANE organizes many family friendly events to promote Indian heritage. Their next event is ‘Rang Barse’ virtual Holi celebration on March 28th.

Meena concluded the program by sharing that the event had been the culmination of a journey with fellow women leaders, and that she had enjoyed the many new friendships. She thanked the Core Team that was behind the program, and noted the key contributions of Neha Garg and Rashi Gujral, the two women who worked behind the scenes to make the virtual experience seamless. She reiterated the keynote speaker’s message to speak up, and encouraged women to be bold, be strong, shine as YOU are, and wear the badges of ‘Bossy’ and ‘Troublemaker’ with pride.

The complete virtual program can be watched on YouTube here: https://www.youtube.com/watch?v=nAPDyflvLbQ