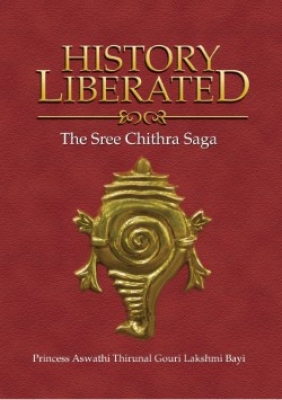 New Delhi– A biography of the last Maharaja of Travancore that attempts to provide an “authentic” account of his accession and his legacy is, however, silent on the shenanigans of his Dewan, Sir C.P. Ramaswami Aiyar, to retain the independence of the province in 1947 and his deal with the British to export the states valuable mineral resources, while the author obfuscated on the two issues in an interview with IANS.

Opinion is divided over whether the Dewan should only be seen as a wily strategist trying to position his state globally by leveraging its mineral resources — monazite sands in Travancore were said to be exceptionally rich in thorium and uranium. The other view was that he was manipulative, feisty and virtually ran the state and dominated the ruler, IANS had reported in November 2020.

“The bottomline, though, was that he was sharp and prescient enough to realise that the rare earth material was a strategic resource that would give Travancore a leg up in directly dealing with western powers, bypassing the Indian state, at a time when they were trying to build their arsenal against the backdrop of the Cold War. Hence, in its efforts to stay independent, it was expected that the British would be benign towards him and Travancore because of the thorium deposits,” the IANS story said.

Veteran editor Sandeep Bamzai’s book “Princestan, how Nehru, Patel and Mountbatten made India”, revealed for the first time the full story of how Jawaharlal Nehru scuppered Ramaswami Aiyar’s plans for Travancore’s independence on the back this strategic power as the ambitious Dewan worked on a deal with Lord Wavell, the Viceroy.

Thus, the question that was posed to Aswathi Thirunal Gouri Lakshmi Bayi, the niece of Travancore’s last Maharaja, Sree Chithira Thirunal, and the author of the book “History Liberated” (Konark) was: There are plenty of references to CP Ramaswami Aiyar but the book is silent on his attempts to compel the Maharaja to opt for Independence and his pact with the British to export a valuable mineral.

The answer: Sir C.P. Ramaswami Aiyar Did Not compel the Maharaja to opt for independent Travancore. There are quite a lot of references on independent Travancore in the book itself, so I would request the interested party to go through it. Such an important decision, which is a moot decision, a fundamental decision, affecting the very existence of Travancore, such an important decision can never be one-sided. And to say that Sir CP compelled is also wrong. Whatever very important decisions were taken were taken after much care, after much thought and mutual discussion. It was not a dictatorship or of somebody sitting and just ordering about. It is not like that at all. It (topic) is a very huge area, and I have to my best ability dealt with it in the book.

“I have not gone too much into detail about the valuable mineral export etc, and I did not try to also because maybe did not occur to me at the time, that is one aspect of it. If it had maybe I would have included it. Secondly, the book was becoming quite voluminous even as it is. Somehow I think it did not strike me perhaps. I have no real explanation for that,” Lakshmi Bayi added.

The author was also silent on the road ahead after a Supreme Court judgement, in the wake of a decade-long battle, giving the erstwhile royal family a greater say in the running of the Sree Padmanabhaswamy Temple, considered one of the richest in the world because of the treasures it holds, and how this wealth could be utilised in a fruitful manner.

“I do not wish to respond to questions relating to the temple or whatever the wealth that it possesses, or its administration – all those things are not part of this book. Only one correction is regarding ‘treasure’. ‘How can the temple’s treasure’- treasure is a misrepresentation because whatever is a treasure, maybe I am wrong, if I’m wrong I may be forgiven and corrected. Treasure is normally found underground, or at least it is something which is stumbled upon, accidentally, nobody knows about it, and it comes as a huge surprise or whatever it is. Here, that the temple had this wealth was very much known. If it is treasure then the state can claim part of it. This (the temple vault) is not treasure, it is wealth. That is the difference. There is a difference in the nuances in wealth and treasure, it is not just nuances, the dictionary meaning of the two are different as well,” Lakshmi Bayi replied.

Still, “History Liberated” would be of interest to the lay reader as it provides a peep into the past of the Travancore royal family, which traces its lineage to the Chera dynasty that has its roots in the early centuries of the Common Era.

The last Maharaja, Sree Chithira Thirunal (1912-1991), had ascended the throne in September 1924 when he was just over 11-years-old (after his maternal great uncle Sree Moolom Thirunal passed away), but the reins of the kingdom were placed in the hands of his aunt, the Senior Rani Setu Lakshmi Bayi, who ruled the kingdom as Regent till he would come of age, i.e. after he turned 18.

However, this set off a tug-of-war in the royal household, between the two factions – one belonging to the Senior Rani Setu Lakshmi Bayi and the other to the Junior Rani, Setu Parvathi Bayi (Sree Chithira Thirunal’s mother). There were thinly concealed attempts to prolong the Regency by the faction related to the Senior Rani, by portraying the young Maharaja as mentally unfit to rule, to the British colonial powers who would take the final call on whether to invest Chithira Thirunal with full powers. There were also three alleged attempts on the life of the young prince.

However, the plans fell through after Chithira Thirunal proved his intelligence and ability to govern during a meeting with the then Viceroy, Lord Willingdon, who appreciated the young Maharaja’s mental acumen and declared him fit to rule. Chithira Thirunal was invested with full powers as king in November 1931.

The author then details some of the major steps taken by the young Maharaja – like the epoch-making Temple Entry Proclamation Act in 1936, a major social reform that won praise from Mahatma Gandhi himself. The Act opened up the doors of Hindu temples to all castes, doing away with the earlier system of barring those from lower castes from entering the temples.

Chithira Thirunal also set up Travancore University in 1937, launched the Sri Chitra Tirunal Medical Centre, which even today is a premier medical institute in Kerala, the Travancore Bank- which later became the State Bank of Travancore – and launched a host of other reform measures to help his people.

Chithira Thirunal was the Maharaja of Travancore till August 1949, after which he was appointed Rajpramukh of the united states of Travancore and Cochin. He had signed the Instrument of Accession in August 1947, along with the 500 plus other princely states. His role of Rajpramukh ended with the birth of Kerala state in 1956.

“Many people have been for quite some years asking me to write a book on Maharaja Chithira Thirunal, who was so dearly beloved to the people of this land, whose memory even today brings tears to the eyes of many of the senior people; even to the young people who have never known him, for many of them he is so special. But I had been putting it away due to a number of reasons; but as the years progressed, I felt that if we do not do something and write when we are able to, if in my generation somebody does not write there would be nothing very authentic about Maharaja, my maternal uncle, and his mother, Maharani Setu Parvathi Bayi, my grandmother,” the author told IANS. (IANS)