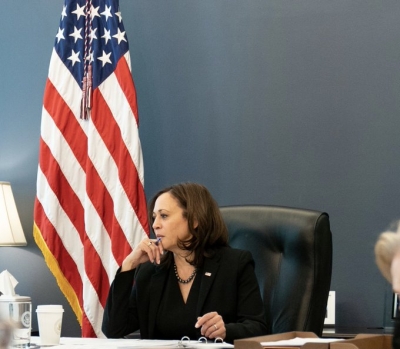 Washington– US President Joe Biden announced that he picked Vice President Kamala Harris as the point person in the country’s diplomatic efforts with Mexico and the Northern Triangle countries in Central America to stem migration at the southern border.

Biden made the announcement at the White House on Wednesday, describing Harris as someone compared to whom nobody “is better qualified to do this,” citing the vice president’s experience as California’s former attorney general, Xinhua news agency reported.

Faced with bipartisan pressure to tackle the surge of immigrants, especially unaccompanied children seeking reunion with their parents in the United States, at the US-Mexico border, Biden acknowledged there was a “serious spike” in people heading to the southern border even during the previous administration.

“This new surge we are dealing with now started in the past administration but it is our responsibility” to resolve the problem, he said.

Senior administration officials briefing reporters on the decision said Wednesday that Harris will work along two tracks: in the near term, “stemming the flow of irregular migrants” to the United States; and in the longer term, establishing a “strategic partnership” with Mexico and countries in the Northern Triangle — El Salvador, Honduras and Guatemala — that is “based on respect and shared values, to enhance prosperity, combat current corruption, and strengthen the rule of law.”

The new role of Harris resembles that of Biden when he was vice president and asked by then President Barack Obama in 2014 and 2015 to lead diplomatic efforts in the Northern Triangle after a surge of unaccompanied minors from those countries began arriving in the United States.

Harris said Wednesday that there is “no question this is a challenging situation,” stressing the need to enforce laws and address the root causes in the meantime. She said she looked forward to engaging in diplomacy with the relevant countries, as well as reaching out to the private sector.

Administration officials including Roberta Jacobson, special assistant to the president and coordinator for the southwest border, and Juan Gonzalez, the National Security Council’s senior director for the Western Hemisphere, travelled to Mexico and Guatemala this week to discuss with officials there plans to stop migrants from fleeing the countries. (IANS)