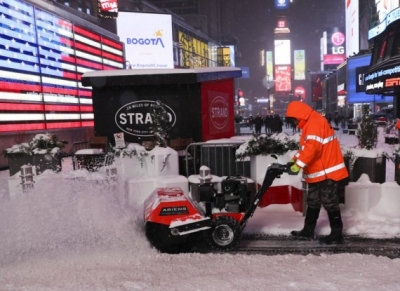 Washington– The US East Coast is bracing for a major winter storm, which is expected to dump at least 60 cm of snow, along with wind gusts of up to 80 km/h, it was reported on Monday.

In an update, the National Weather Service said the storm will lash parts of Pennsylvania, New York state and New England, the BBC reported.

“If you can stay home, stay home. Keep the roads clear for emergency vehicles.”

About three-quarters of flights into the JFK Airport have been cancelled, said the BBC report.

He also suspended all public transport throughout the state on Monday.

The snowstorm has already hit the West Coast, with California experiencing more than 6 ft of snow last week. (IANS)

In a bizarre news, an Oklahoma man kills neighbor, cooks her heart with potatoes