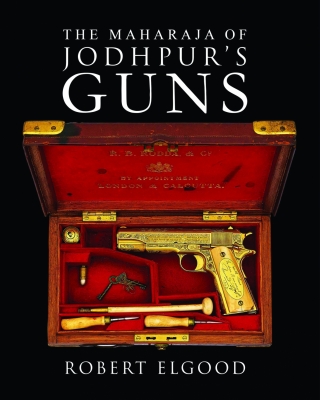 New Delhi– He holds a DPhil from Oxford in Indian Anthropology, is a Fellow of the Society of Antiquaries and of the Royal Society; he ran an antique picture gallery in Sussex and restored a 15th century villa and garden in Florence before he found his true calling in chronicling the world of ancient arms and ammunition.

“From childhood I was interested in history, particularly military history, and arms; and I loved books from an early age,” the multi-faceted Robert Elgood told IANS in an interview of his latest book, “The Maharaja of Jodhpur’s Guns” (Niyogi Books).

“I was made librarian at my prep school and won a prize for writing poetry. Aged eighteen I told my family I would write. My grandfather wrote books on the history of Persian medicine and my great uncle wrote on Egyptian history. Books and writing was a family tradition. Indian arms combines wonderfully rich history and anthropology, my subjects at SOAS (School of African and Oriental Studies University of London) and Oxford. I was born to write, Elgood added.

This, in fact, is his second work on Rajput arms and armour.

“I wrote an earlier two-volume book for the Maharaja of Jodhpur — Rajput Arms and Armour. The Rathores and their Armoury at Jodhpur Fort’ — beautifully published by Niyogi in 2017. The Maharaja wanted his guns included, but I told him I would write this as a separate volume as his collection was large and the subject had not been comprehensively covered before,” Elgood explained.

Considerable research went into the writing of the book.

“Research work has been part of my life since before I studied Islam at the School of Oriental and African Studies in 1975-9. I took about four years to write the present book and this involved months spent in India every year.

“It was a privilege to live in the fort at Jodhpur as I wrote my books for the Maharaja and he and his family were wonderfully hospitable. I had always wanted to work in India and I loved the people and the place. During a dozen years of writing it became a home from home. There are places in my own country and in Italy where I lived for five years that I hold dear but I always feel a sense of regret at not being in India,” Elgood elaborated.

The erstwhile princely state of Jodhpur owned some of the best Indian matchlocks in the subcontinent. These were admired at the Delhi Durbar by English visitors in 1911. The Maharajas of Jodhpur, who established the collection, gathered indigenously designed weapons as well as shotguns, revolvers and automatic pistols and modern British and American sporting guns, by many of the famous 20th century gun manufacturers.

To that extent, the book celebrates the martial traditions, sports of hunting and equitation and the heritage showcased in the gun collection at the Mehrangarh Museum Trust at Jodhpur.

The initial chapters describe how gunpowder weapons came to India, possibly before the Europeans arrived while more than 350 unique images of guns and paintings depict the Rajput way of life.

The second half of the book includes a study of developments in sporting guns in India in the 19th century, a chapter on how hunting in Rajasthan took place with spears and guns, an extract from the hunting diary of Maharaja Umaid Singh in 1926, a catalogue of this ruler’s sporting guns and a chapter on the experimental guns made under the guidance of Maharaja Hanwant Singh at the Mehrangarh Fort.

How did he get interested in the world of ancient arms?

“I was invited to write the first book on Islamic Firearms by the Tareq Rajab Museum, Kuwait, published in 1995, and my interest continued. I subsequently wrote a book for the Greeks on firearms in the Ottoman Balkans. The market for arms is international, then as now, and I became very interested in the spread of the technology through trade and political links. My doctorate from Oxford in Indian anthropology covers another side of my research,” Elgood explained.

That has translated into works like “Hindu Arms and Ritual. Arms and Armour from India 1400-1865 (2004) and an introductory essay to a new edition of Sir Caspar Caspar Purdon’s “Catalogue of the Collection of Indian Arms and Objects of Art at Marlborough House” (2008), originally published in 1898. His paper on Deccani Arms for a symposium at New York’s Metropolitan Museum in 2008 was published in “Sultans of the South. Arts of India’s Deccan Courts 1323-1687” in 2011.

What of the future? What is his next project?

“I am working with ICOMAM (International Committee for Museums and Collections of Arms and Military History) to complete an illustrated glossary of arms terms relating to the Near and Middle East, Asia and the subcontinent. I have built this glossary since 1995 and it is time it was published,” Elgood concluded.(IANS)