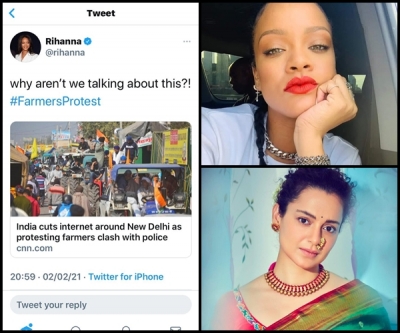 The pop star’s tweet has been widely shared by netizens.

However, Kangana chose to offer an answer to Rihanna and responded to her tweet using adjectives like “fool” and “dummy” while addressing her.

Reacting to her tweet, Kangana wrote: “No one is talking about it because they are not farmers they are terrorists who are trying to divide India, so that China can take over our vulnerable broken nation and make it a Chinese colony much like USA… Sit down you fool, we are not selling our nation like you dummies.”

Just a few days ago, the Bollywood actress had tweeted calling Indians supporting the ongoing farmers protest as terrorists.

“Six brands cancelled contracts with me some were already signed some were closing n said I called Farmer terrorists so they can’t have me as an ambassador. Today I want to say each and every Indian who is supporting these riots is also a terrorist including anti national brands,” Kangana Ranaut had tweeted on Republic Day. (IANS)