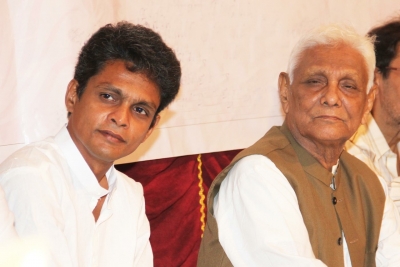 Ayaz says his colleagues suggested that he turns to writing film numbers and popular songs, adding that “shayari” is not getting as much attention as it should, for people to stay connected with poetry. It was a reason, he says, why he decided to write lyrics for films and music videos.

“Two of my films are releasing this year and in one of the films titled ‘Baba’, I worked with music director Pawan Muradpuri. When it comes to being a lyricist, I always feel whatever I write, people should enjoy my words. My colleague suggested that I should write lyrics for films like my father. Since ‘shayari’ is dying, I thought about it. I always treat myself like a newcomer as I want to get recognised on the basis of merit. In the upcoming year, I have two to three films and a few video songs as well,” he said.

Tera hi ehsaas is streaming on YouTube and has garnered over 173K views since release. The songs is sung by Dev Negi and composed by Pawan Muradpuri. The video features Shahid Khan and Aayesha Kapoor.

Opening up on his journey, Ayaz said: “Since my childhood, I was always surrounded by books, and shayars and writers who would visit our house. My father Zafar Gorakhpuri always appreciated and encouraged them. I used to read ghazals, nazms, and story books, and started reciting ‘shayari’ in my college days. Initially, my parents were worried about my studies but I managed both. I did my first ‘mushayara’ at the age of 20, where my father was present. He was happy and appreciated me. Since then, I have done many mushayaras across India and have started getting media visibility.”

About his legacy, he said: “I come from such a big family that it always feels like walking barefoot on a sword. I am fortunate that I was born in such a big family, hence I want to live my life with simplicity. I already have so much responsibility for my legacy, so I feel that I must guide newcomers in the field of shayari and motivate them.” (IANS)