BOSTON—Judge Neil Sherring, born and brought up in Boston, is the first generation of Indian Americans, and thus, has a different sense of law, community and the growing up. 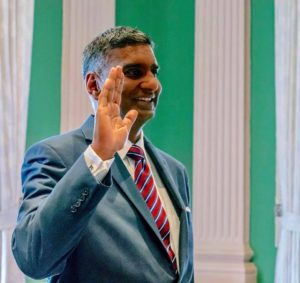 In an exclusive video interview on Chai With Manju’s Making History series, Judge Sherring talks about his journey as a Bostonian and his parents who had moved to the United States in late 1950s as students.

In those days, Mr. Sherring, his sister and his parents shared one-bedroom apartment in Boston. At age six or seven, his building caught on fire. They were rescued safely.

Mr. Sherring says that early tragedy gave him a better of appreciation of things, friends and family. To watch the full interview, please click here, or on the image below.

Mr. Sherring is the first Indian American to serve as a judge in the Massachusetts Housing Court. Prior to sworn in as a judge, served as a partner at the law firm of Dakoyannis & Sherring, LLC where he represented clients in all stages of civil litigation in state and federal courts.  Prior to that, Mr. Sherring worked as Litigation Associate at the Boston law firm of Mintz Levin and as an Assistant Attorney General at the Massachusetts Attorney General’s Office