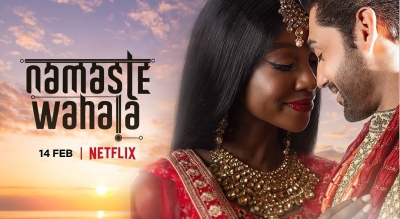 We aren’t in a Bollywood movie, Indian boy tells Nigerian girl. For their sake you wish they were, their love story would be far more exciting.

Namaste Wahala harks back to the way Bollywood doesn’t make love stories anymore. You have a boy and a girl in love. You have a fuming parent on either side who does not approve of the match. Throw in some ‘thanda naach-gaana’, tired rom-com, zero chemistry plus random melodrama, and what you get is 106 minutes of poorly cooked masala potboiler that’s too amateurish to regale.

For the record, the film is an Indo-Nigerian attempt. So, the Bollywood-Nollywood crossover mush is naturally pitched as a USP. It all ends up in a mess.

Writer-director Hamisha Daryani Ahuja casts Bollywood actor Ruslaan Mumtaz as Raj, an investment banker in Lagos, Nigeria. He bumps into social worker Didi (Nollywood actress Ini Dima-Okojie) on the beach during an early morning jog, and it is love at first sight for both.

One love song later, it is time for Didi to introduce Raj to her parents. Of course, Didi’s father (Richard Mofe-Damijo) has a nice Nigerian boy (Ibrahim Suleiman) tucked away for her in his office. He is about to unleash the vintage Amrish Puri brand of rage as Raj goes for the good old ‘paye lagoo’ drill.

Didi has similar fate in store when Raj’s very Punjabi mamma (Sujata Segal) comes calling. She is a fullblown Kirron Kher parody, grumbling over how thin Raj has become living alone, asserting that she’ll feed him “nice butter chicken” so he’ll become “nice and fat” again. Her retort, as Didi tries to fall comically at her feet on their first meeting, is supposed to add to the comedy — she asks Raj if Didi can prepare chhole bhature.

At times, a bad formula film becomes inadvertently funny for the very cliches it tries to hawk. The problem with Namaste Wahala is even cliche-ridden bad formula films in the Bollywood rom-com genre went past expiry date quite some time ago.

For the sake of authenticity, writer-director Ahuja maintains a mix of English, Hindi and local Nigerian lingo. You sense a lack of coherence in the overall mood the dialogues try to establish, just as the screen-writing (Diche Enuwa and Temitope Bolade-Akinbode) struggles to craft engaging storytelling. This, in turn, affects the performances as the cast strives to get over poorly-penned roles.

Namaste Wahala broadly translates to ‘Hello trouble’. For the sake of an interesting watch, we wish we could spot a speck of trouble somewhere in this story. (IANS)