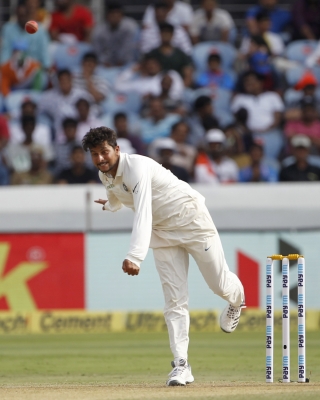 New Delhi– Chinaman bowler Kuldeep Yadav has played six Test matches in four different countries, since making debut in early 2017. His last Test was the fourth and final match against Australia in 2019 in Sydney, where he took five wickets in the only innings he bowled. Since then he has been forgotten, though he watched India succumb to England from the dressing room in the first Test in Chennai on Tuesday.

In six Tests, 26-year-old Yadav has bagged 24 wickets at an average of 24.13, and is still reckoned as the X-factor and a dangerous bowler for batsmen around the world.

After India’s embarrassing 227-run defeat at the MA Chidambaram Stadium in Chennai on Tuesday, voices seeking Yadav’s inclusion in the Indian XI for the second Test, beginning at the same venue on Saturday, have started growing.

“Now, we have no choice but to give him a chance. He should be given a fair deal. There was a lack of spinning [penetration] in this particular first Test match,” Prasanna told IANS.

Kuldeep was selected for Australia’s tour recently but he wasn’t played in any of the four Tests, despite all the preferred players being sidelined with injuries. India preferred off-spinner R Ashwin, off-spinner Washington Sundar, and Ravindra Jadeja while Yadav watched India win their second consecutive Test series Down Under from the dressing room.

Former India left-arm spinner Maninder Singh, too, threw his weight behind Yadav, and said if he’s not in the Indian team’s scheme of things he should not be carried as a passenger.

“If you are not confident about playing him, don’t carry him as a tourist or a passenger. I can’t think of a reason why he’s not played, except that they might not be happy with his performance in the nets. And if that is so, the team management should inform the selectors,” Maninder told IANS.

“Yadav will be the X-factor [for England] as there are not many Chinaman bowlers around. Ideally, I would like to see a leg-spinner in the XI against England,” he said.

Yadav made his Test debut against Australia in March 2017 in Dharamsala, under Ajinkya Rahane’s captaincy when Virat Kohli was absent. He bagged four wickets in the first innings to help restrict the visitors to 300, and played a role in India’s eight-wicket win.

The Uttar Pradesh bowler’s next Test was in August in Pallekele, Sri Lanka, in August 2017, when he again bagged a four-wicket haul. Then, he was played in just one match in England in 2018, at Lord’s, London. He was selected for the home series against the West Indies that year, and was for the first time played in two successive Tests. And his sixth and final Test was on the 2019 tour of Australia where he was picked in Sydney and bagged five wickets in the first innings.

“In the Chennai Test, [left-arm spinner] Ravindra Jadeja was missed. Had he been in the side, the game would have been far more interesting than it was. And, If I were the captain, I’d have Washington [Sundar, off-spinner] at one end and specifically tell him to bowl a tight line,” said 80-year-old Prasanna, who bagged 189 wickets in 49 Tests.

“I would tell him that because he is not a big spinner of the ball – and he couldn’t turn the ball on this wicket; he’s a tight bowler and definitely an excellent bat. So, Washington needs to be in the side, and I would preferably use him from the pavilion, and operate the two other spinners from the other end,” said the Bangalore-based Prasanna.

Will one of the ‘other’ spinners be Yadav in the second Test against Joe Root’s England starting in Chennai on Saturday?  (IANS)