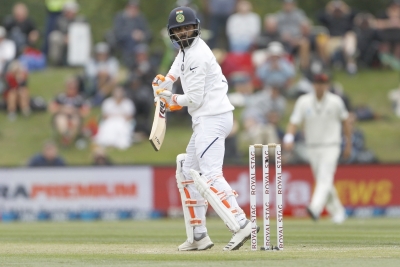 New Delhi– India missed Ravindra Jadeja’s accuracy on Friday, the first day of the first Test against England as neither his replacement left-arm spinner Shahbaz Nadeem nor off-spinner Washington Sundar, who starred in India’s win over Australia in the fourth Test Down Under last month, could control the flow of runs.

The easy drizzle of runs saw Ashwin have a rare off-day on his home ground at the MA Chidambaram Stadium.

Jadeja, whose IPL home base has also been this ground for a major part of his T20 league career, is not in the squad for the first two Tests as he is nursing a thumb injury that he sustained on the tour of Australia.

The India off-spinner bowled 24 overs for a wicket, conceding 68 runs on Friday, trying multiple variations perhaps out of desperation to extract a wicket on a flat surface. The wicket of Rory Burns that he managed was more out of luck as the well-settled left-handed opener fell to a reverse sweep after hitting a boundary.

Ashwin, 34, has revelled in the company of Jadeja with whom he has played almost every Test at home over the last eight years.

Jadeja, not a great spinner of the ball, bowls accurately and uses variations in speed which can give India crucial breakthroughs on flat surfaces.

Former India left-arm spinner Maninder Singh says Jadeja has the ability to put doubt in batsman’s mind by turning just one ball in his initial spell and then he uses his accuracy to do the rest of the job.

“Jadeja has the quality that he can turn one ball in his initial spell on good wickets somehow. Then he uses his accuracy with great advantage,” Maninder told IANS.

That is far more than what Jadeja leaks anywhere let alone at home.

Jadeja, 32, concedes 2.44 runs an over and at home his economy rate improves to 2.24. The Saurashtra all-rounder’s accuracy in bowling ensures the batsman try and take on the other bowlers including Ashwin and give away easy wickets. Jadeja himself takes wickets as well.

The last time England travelled to India, Jadeja was the second highest wicket-taker with 26 scalps behind Ashwin’s 28.

Ten of those 26 wickets — including seven in second innings — of Jadeja had come in the last Test in Chennai, the venue of the ongoing Test. That match incidentally was also the last Test played at the MA Chidambaram Stadium.(IANS)