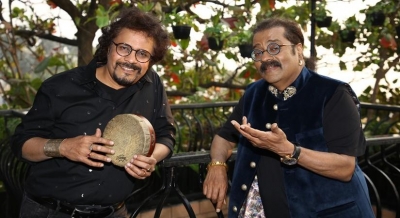 New Delhi– Composer Bickram Ghosh and singer Hariharan have teamed up to bring to audiences myriad shades of love, the much needed emotion post pandemic. They have released an album titled ‘Ishq – Songs Of Love’.

With music by maestro Bickram Ghosh and set to vocals by legendary playback singer Hariharan, ‘Ishq – Song Of Love’ features music video directed by Arindam Sil and lyrics by Sugata Guha. It features Abhisek Mallick on the Sitar and, interestingly, features Bickram Ghosh himself for live percussion and Tabla.

Known for critically acclaimed hits like ‘Chants Of India’ with Ravi Shankar and George Harrison, ‘The Music Room’ with Sonu Nigam, ‘Pulsating Drums’ with Zakir Hussain and Taufiq Qureshi, and several other iconic tracks with Pandit Ravi Shankar, Bickram Ghosh is arguably one of the greatest Tabla exponents of all times.

The composer of Ishq, Ghosh said about the album: “The idea of love changes over generations of time. We keep hearing people say, ‘woh puraane zamaane ke gaane hai’ (those are songs of the old times). I’ve really wanted to make an album of love songs with different nuances of love.”

“These have been difficult times! Unexpectedly, we’ve achieved something musically. During the pandemic, we’ve completed an entire album as well as the videos,” he added.

As per veteran playback singer Hariharan, creating an album is a lot of hard work taking hours, days and months of an artist’s time. “Here, we have six songs with six stories! The kind that tells its own story. The nuances behind each song are as different as the stories behind them. All in all, the outcome of love is different.”

Shaan: ‘Majboor ho gaye’ will take you back to days when melody was paramount