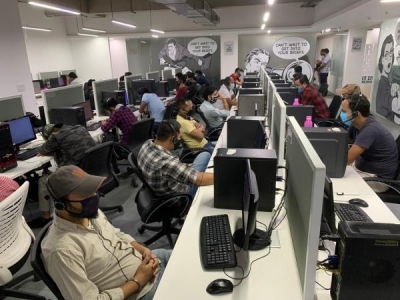 Gurugram–The Chief Minister’s Flying Squad on the intervening night of Friday and Saturday busted a fake call centre, which has been operating out of a building at Udyog Vihar’s Phase-2 here for the past five months.

Police said that the employees had been duping the US nationals on the pretext of offering them loans by showing fake cheques to the victims and used to charge $100 to $500 as service charge, via e-check, debit and credit cards.

Three accused identified as Sarjeet Kumar, Kapil Dev Patel and Bhudev Lohar were arrested and 5 mobile phones, 2 laptops, 1 hard disk and several other electronic gadgets were recovered from them.

They were paying Rs 6 to 7 lakh monthly rent for the building.

According to the police, on a tip-off, a team led by ACP Inderjeet Yadav raided the call centre where they spotted 35 boys who were communicating with the American nationals.

“The youths were employed at the call centres, which were being operated without permission. Also, the centre did not have any license issued by the Department of Telecommunications (DoT),” Yadav said.

During the questioning, the accused revealed that they used to communicate the US citizens to provide fake loans and sent pop-ups and used to charge nearly $100 to $500 per client as service charge e-cheque, credit and debit cards,” he added.

“The matter is under investigation. How the accused was operating the fake call centre it’s a part of an investigation. The involvement of other people cannot be ruled out,” he said.

In connection with the matter, an FIR under relevant sections of the Indian Penal Code (IPC) including IT Act has been registered at the Cyber Crime police station for further investigation.