New Delhi– Actress Priyanka Chopra Jonas says she loves homemade Indian food, and misses dal and roti tremendously when she is in the US.

The actress most recently featured in “The White Tiger”, a dark comedy about class divide and the murky realities of Indian society. Directed by Ramin Bahrani, the OTT-released film stars Adarsh Gourav and also has Rajkummar Rao, Mahesh Manjrekar and Vijay Maurya in pivotal roles.

Opening up about the scene which spoke to her the most in “The White Tiger”, Priyanka said: “The scene between Balram and Pinky really speaks to me, when she’s imploring him to think about having his own life and his own family because she pulled herself out of the circumstances that she was born into, and wants him to do the same thing. I love that scene.”

She also praised her co-star Rajkummar Rao. “I love Rajkummar Rao. I’m such a fan of his work, and I think he was amazing in ‘Newton’,” Priyanka said during a conversation with IMDb.

Salim Diwan: I have adopted 12 children

Mumbai– Actor Salim Diwan has revealed that he has adopted 12 children, and he looks after their education. He points out there is a stigma around adoption in our country.

“Adopting a child is very common abroad. There are plenty of international renowned names who have adopted children and even funded their education. In India, the thought is finally pacing up but it will still take a lot of time,” Salim said.

“I have always believed in the concept of ‘right to education’, children are our future and right education will not only help them prosper financially, it also makes them a better human being. As of now I have adopted and looked into the education of 12 lovely bright children,” he added.

Explaining his thoughts, he said: “There is a stigma around adoption that has been created by the people in our society so they either don’t do it or keep it in private. I never believed in talking about it but I feel with the changing phase and thoughts of the young souls of our nation, now is the time to speak up.”

“I will consider my work done even if my voice reaches out and inspires a few people. I would urge everyone to come out and openly accept these kids as they can live a life which they might have only dreamt off,” he added.

Salim, who made his debut with “Bollywood Diaries” in 2016, will next be seen with Raima Sen and Vinay Pathak in the film “Aliya Basu Gayab Hai”, set to release next month.

Mumbai– Actress Tara Sutaria posted a breathtaking picture on her Instagram account on Wednesday, in a strap top and long skirt. Tara poses on the beach in the image.

She was immediately flooded with compliments of fans, shortly after posting the picture. The actress currently has over 5,84,500 likes fpr the post.

In her caption, Tara also congratulated her friend Arpita Mehta for launching her coffee table book.

“Early mornings feat. the sand, sun and my dear @arpita__mehta whose beautiful work somehow always manages to make you feel feminine, powerful and more yourself than ever! So happy for the release of your coffee table book, and that I get to be part of it,” Tara wrote as part of her caption.

The actress will soon be seen in the remake of “Rx100”, which is also going to be the debut of Ahaan Shetty. Besides this, she has been roped in for “Ek Villian” and “Heropanti 2”.

Malaika Arora shares a glimpse of her daily hustle

Mumbai– Malaika Arora on Wednesday shared a glimpse of her daily hustle with fans, stressing on the need to get healthy and strong in mind and body.

Malaika posted a picture on Instagram, where she is seen wearing a black crop top paired with black lycra pants, with a jacket tied around her waist. For Covid-19 precaution, she wears a matching black mask.

“Daily hustle …..Get healthy, get strong both mind n body,” Malaika wrote as the caption.

Malaika recently shared three pictures sitting on the sofa in an oversized shirt paired with calf-length boots. She completed her look with minimum make-up and open hair.

Deepika Padukone wishes her ‘little one’ Anisha on birthday

Mumbai– Deepika Padukone has wished her sister Anisha Padukone on her birthday on Wednesday. The Bollywood actress thanked Anisha for being the anchor in her life and keeping her grounded. 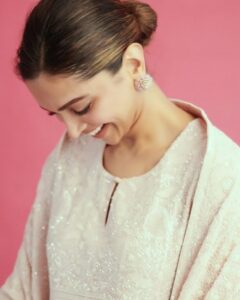 “2.2.2021. Thank You for being the anchor in my life and for keeping me grounded yet always knowing when to keep me afloat. Happy Born Day ‘My Little One’! May you always be blessed with good health, peace of mind and prosperity in abundance…I love you! #happybirthday @anishapadukone,” Deepika wrote on Instagram. She also posted a picture of the two sisters.

On the work front, the actress has a busy year ahead. She will be seen in Shakun Batra’s upcoming yet-untitled film that also stars Siddhant Chaturvedi and Ananya Panday.

Deepika will also be seen in an untitled film with Amitabh Bachchan and Prabhas, and she has “83” in line where she features opposite husband Ranveer Singh.

She will also unite with Bollywood star Hrithik Roshan for the first time for an action adventure “Fighter”, directed by Siddharth Anand. (IANS)