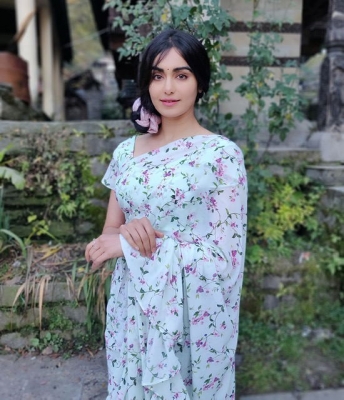 Adah Sharma: I don’t think I will have any friends after ‘Chuha Billi’ releases

Mumbai– Actress Adah Sharma jokes that she may not have any friends left after people watch her new short film, Chuha Billi. She plays a mentally disturbed character named Katrina in the film directed by Prasad Kadam.

“I don’t think I will have any friends after the film releases,” she laughs.

On her character, Adah tells IANS: “My character is one of the toughest roles I’ve done. For everyone asking me if Chula Billi is a horror movie, it isn’t. But it is very scary. I’m really thrilled that Prasad thought of me for the part. I’m glad we are pushing the envelope and creating some awesome content.”

The film is set to release on February 12.

Sara dropped the birthday message on Instagram, along with several images of their holiday in Maldives. One image also features her brother Ibrahim. In the pictures, Sara and Amrita Singh are seen twinning in blue outfits.

“Happy Birthday to my whole world. Thank you for being my mirror, strength and inspiration. I lo-blue the most,” she captioned the images.

She shared the post with the tags with #likemotherlikedaughter, #twinning, #blessed, #winning, #soulsisters, #bosslady, #beautifulmaa and #travelbuddy.

Sara was recently seen in the OTT-released film “Coolie No. 1” along with actor Varun Dhawan, and she has started shooting for her next, “Atrangi Re”. The film co-stars Akshay Kumar, Dhanush and Nimrat Kaur, and is directed by Aanand L. Rai.

“Atrangi Re” is written by Himanshu Sharma and is billed as a cross-cultural love story.

Shilpa Shetty: Everyone you meet is fighting a battle you know nothing about

Mumbai– Bollywood actress Shilpa Shetty Kundra on Tuesday suggested that we should always be kind to whoever we come across in life because we are unaware of their battles and struggles.

“Everyone you meet is fighting a battle you know nothing about. Be kind, always!” Shilpa wrote in an Instagram post.

She continued: “There’s so much we experience… so much that happens in our daily lives. But, we put on a brave front, continue to fight our battles, and move ahead. Not many know what we’re going through; likewise, we may also not know what someone else is going through.”

“The loss of a loved one, the stress at work, the pressures of life, or any kind of personal issues can wreak havoc with a person’s mind. The best way to maintain peace & harmony is by being kind to everyone we meet. Be humble, understanding, patient, and accepting. You never know who may need it.

Have you ever experienced an unexpected, kind gesture when you needed it the most? Let us know in the comments,” she added.

Shilpa keeps sharing life lessons for her social media followers. The actress recently suggested that we should not blindly believe or be influenced by all that we see on social media.

The actress is set to make a comeback to films after 13 years with the films Hungama 2 and Nikamma.

Varun Dhawan urges fans to ‘never back down’

Mumbai– Bollywood actor Varun Dhawan has shared his mantra on social media with fans. He urged everyone on Tuesday to never back down.

Varun posted a picture on Instagram. In the image, a shirtless Varun is seen sporting black gym pants and gloves.

“Never back down,” he wrote as caption.

Last month, Varun got married to his childhood sweetheart Natasha Dalal in a hush-hush ceremony in Alibaug, attended by family and close friends.

The actor was last seen in his digitally-released film “Coolie No.1”, which also stars Sara Ali Khan. The film is directed by Varun’s father David Dhawan.

He will next be seen in “Jug Jugg Jeeyo”, alongside Anil Kapoor, Neetu Kapoor and Kiara Advani. The Raj Mehta film will narrate the story of two couples.

Mumbai– Actress Diana Penty announced her debut in Malayalam films on Instagram on Tuesday. She will be seen alongside actor Dulquer Salmaan in an untitled film directed by Rosshan Andrrews.

The film is produced by Dulquer Salmaan. Other details are still under wraps.

Diana wrote with along with a picture: “Cheers to new beginnings! Super excited to join @dqsalmaan, @rosshanandrrews and the whole crew on this new journey – my first Malayalam film! Looking forward to the ride. ”

Diana will also be seen in “Shiddat: Journey Beyond Love”, a love story, along with Radhika Madan, Sunny Kaushal and Mohit Raina.

Deepika: Would like to see a world where no life is lost due to mental illness

Mumbai– Bollywood star Deepika Padukone, who has openly spoken about her battle with depression at the peak of her career, says she would like to see a world where no life is lost due to mental illness.

Deepika posted a picture of her organisation, The Live Love Laugh Foundation, on Instagram on Monday.

Alongside the image, she wrote: “Mental health is a cause that is extremely personal and dear to me. Over the last 5 years, donors, partners, government authorities and our incredible team have all played a crucial role in LiveLoveLaugh’s journey, but the greatest impact has been from those who have had a lived experience with mental illness, and their caregivers.”

Deepika added: “I would like to see a world where no life is lost due to mental illness, and LiveLoveLaugh is committed to delivering on that aspiration.”

One of the highest paid actor in India, Deepika, who started her career with “Om Shanti Om” in 2007, has set up a foundation to create awareness on mental health named The Live Love Laugh Foundation in 2015, which creates awareness about stress, anxiety and depression. (IANS)